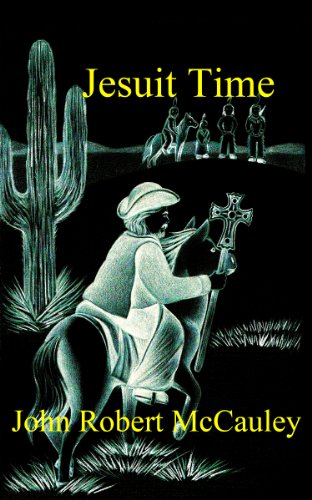 about this book: In September 2012, the Author attended the reenactment of Admiral Don Pedro Menendez de Aviles' founding of St. Augustine, Florida for Spain. At the reenactment, the Admiral knelt down and was blessed by a missionary, who accompanied the expedition. The Missionary then blessed this land for God and for the Spanish Empire. This moment was special, because the reenactment was held on the exact same spot where the landing actually occurred. Historically, missionaries were on almost all of Spain's expeditions in the New World. The missionary settlements were set up by these evangelizing individuals to convert the natives and transfer the native's hope of comfort and happiness from this world to the next.

Approximately six months later, a Jesuit was named the new Pope. This made the Author more excited to write a book about the Western missions. Follow the twists and turns as Brad tries to trace his Jesuit ancestor...a stranger in a world of pagan natives. "Jesuit Time" is something different…yet exhilarating. Readers will be able to follow Brad and Brian over a period of weeks as Brad mines the sensational stories of the real life missionaries, who shouldered the main burden of raising the standard of living in the New World, while at the same time, instilling a sincere devotion to the Catholic belief. In this regard, the native's prayer at Western missions continues to survive to this day and continues to baffle nonbelievers.