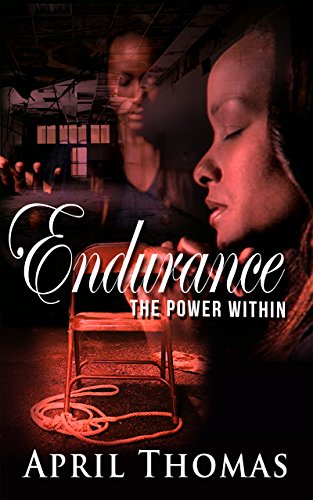 Book: Endurance The Power Within (The Endurance Series) by April Thomas

about this book: Mei Gordon, has been fighting a spiritual battle that has destroyed her happiness. She is rejected, used up, emotionally abandoned, and spiritually lost. Then God sends her a redeemer in the form of Max Martinez. Mei is too jaded to see Max as anything more than a sex-driven teenage boy. Mei has no clue she has captured the eyes, heart and mind of every girl's high school dream guy.

Max Martinez is a teen from a wealthy family of spiritual warriors. Max has not joined his father and uncle in the fight against Satan and his fallen angels. However, Max soon finds reasons to pick up his spiritual sword. He has to protect the girl he loves, and to protect all of humanity.

Max's feelings for Mei have dominated his thoughts, dominated his emotions. Max telepathically sends a message to Mei. Max realizes this may be his only chance to get through to her. Mei is startled when she hears Max's voice in her mind. The experience turns her attention to him. Max has successfully opened the door to Mei's thoughts and, eventually, to her heart and body.

Satan was skillful in convincing the one third of God's angels to rebel against God, but God won. Cast out of heaven with his followers, Satan turned his eyes toward mankind. Satan has learned of God's plan to send four of his archangels in human form to help mankind defeat Satan in a spiritual battle over human souls.

God has chosen his human servants, the couple who will conceive and raise to adulthood the human forms of God's archangels. Satan will not waste any time nor spare any effort to seek and destroy them both.

The union of Mei and Max has ultimate spiritual importance. However, the couple and their union have to stand up against Satan and his forces in order for God's plan to be realized. Mei and Max face a challenge that will test their strength, their skills, their wills, and their endurance.