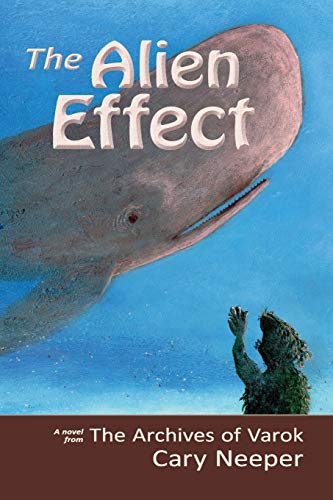 about this book: The Alien Effect was written sometime in the 1980's, then revised every ten years, as my family grew older, along with the mixed family of humans and ellls and varoks. Fortunately, the problems we worried about in the first book of The Archives of Varok (now rewritten as The View Beyond Earth) got a little better. Smog in Los Angeles faded a bit, but the human population began to show signs of stress from overcrowding, not unlike that exhibited by lemmings before their rush to escape the tension.

We were encouraged when The Webs of Varok, the portrayal of what a steady state economy looks like and how it can be disrupted, won a Nautilus Silver Medal for YA in 2013 and was an adult scifi finalist for ForeWord's Book of the Year Awards in 2012. We hurried to update The Alien Effect and toured the San Diego area, where our alien-human mixed family established their school of Full-Earth Economics. I had some fun sketching over photos taken to provide illustrations for the book.

Again my theme--presenting as realistic a human reaction to aliens as possible—drove the plot, and our good elllonian and varokian friends found themselves chasing all over the planet, dodging from one threat to another, while grown-up Shawne experienced true love. Meanwhile, the aliens kicked off a totally unexpected and unpredictable effect. My fascination for complex systems came to life.