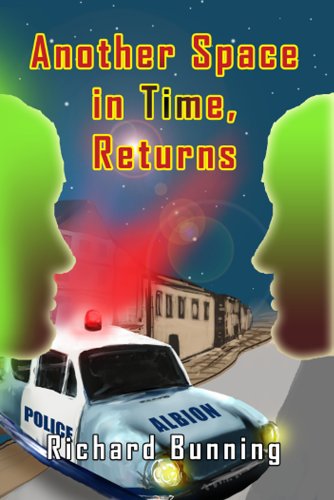 Book: Another Space in Time, Returns by Richard Bunning

about this book: This is a standalone sequel to "umm"? Yes you guessed it. The reader is returned to the planet Goronas, to continue the story of Rodwell's life there to a conclusion. Well, yes, this is science fiction, a very speculative form of it that is. The setting is both very similar and very different from the Earth. The people are the same, many of them actually having memories of a life on Earth before early deaths their and subsequently being "reborn" at the age they died. The environment is so similar that often one would not know one wasn't on the Earth, in fact book one explores the process by which Rodwell was forced to believe.

Rodwell, is again in a struggle against terrorists who wish to subvert society, and enslave the "Arrivals", those that appear on, rather than being naturally born to, Goronas. This time he is working for the police, not that they all know it, in an attempt to infiltrate the terrorist organization by being substituted for his criminal twin brother. Rodwell has never met his twin, and it is far from certain that he ever will. Technologies are similar to contemporary ones here, though some are rather backward. because environmental conditions are a little different, and because even though Arrivals bring knowledge it is often less than cutting edge, and almost invariably incomplete.

This is a full length read that explores many issues affecting us all. Goronas may well be in some sort of parallel existence, removed in time and space. However, its population's problems are far from remote. Light philosophy runs through and alongside the adventure.

I hope you enjoy my book. I love to get feedback.

Video: Another Space in Time, Returns by Richard Bunning