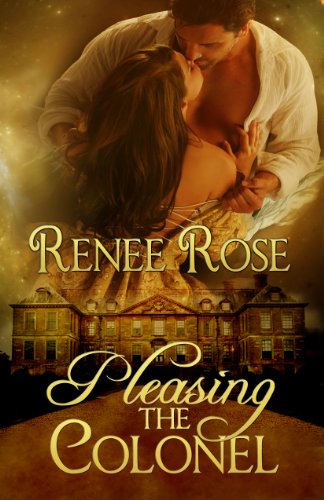 about this book: Pleasing the Colonel is a Regency Spanking Romance about a young governess named Amanda Downy, who takes a post with Colonel Watson, an stiff military man. He's been away at war, so when she's trapped in a crevice after a disastrous carriage accident, she has no idea that one of her fellow passengers is also her master.

Unfortunately for Mandy, she gets tipsy on brandy and reveals a number of things she shouldn't-- including the fact that she falsified her references when applying for the position. Imagine her horror the next morning to sit down at the breakfast table with the very same man who heard her secrets!!

Naturally, the Colonel is not afraid to apply the leather strap to the lovely governess's backside. The problem is that as he gets to know her, finds himself more than a little attracted to her. Resolved to never remarry after the pain of losing his first wife, he struggles with his growing passion for her.

Amanda has never been attracted to military men, but something about the Colonel makes her want to please him. Again and again she finds herself at the mercy of his stern discipline and yet its his kindness that stirs her heart.