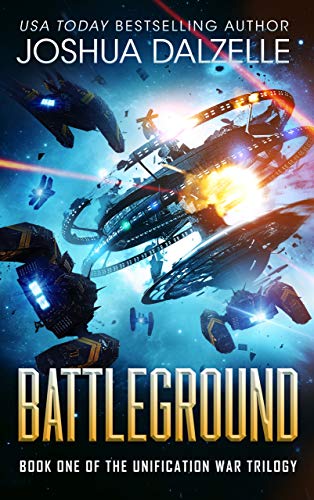 about this book: The final fight to determine who will control Terran space has begun...

Admiral Jackson Wolfe, hero of two wars against implacable alien foes, now faces off against his most evenly matched enemy yet: humans. The Eastern Star Alliance has broken away from the United Terran Federation and is now picking off Federation star systems one by one. Wolfe is deployed with a full task force to make sure another system doesn't cross over, but he senses that things aren't completely what they seem.

This mission will test his resolve in ways he hadn't thought possible.

"Battleground" is the first book of the Unification War Trilogy, the third and final trilogy in the Black Fleet Saga. When I sat to begin this book, it had been nearly two years since I had been with these characters and I feel the break allowed me to see Jackson Wolfe through fresh eyes. Our war-weary admiral wants nothing more than to retire after having fought off the Phage and the Darshik in back-to-back conflicts, so he's less than enthusiastic about being dragged back into service to face off against rogue human factions. It was a joy to work in this series again and it's been bittersweet kicking off the trilogy that will wrap up the whole thing.