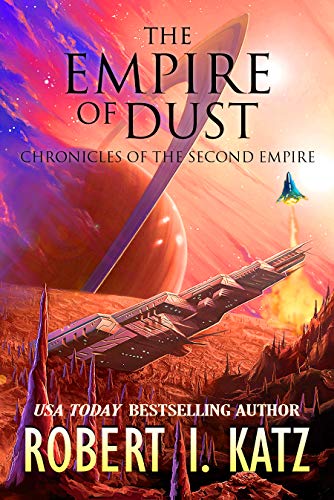 about this book: I love the idea of mankind spreading out among the stars, settling the galaxy and interacting with mysterious, alien races. It's a classic scenario but a great one. A background like this can offer enough scope to tell an almost endless series of stories. The Empire of Dust: Chronicles of the Second Empire is the third book the series and first to feature a new hero, Michael Glover.

Michael Glover was a soldier of the First Interstellar Empire of Mankind, a soldier who was forgotten when the First Empire collapsed.

Now, 2000 years later, Michael Glover is awakened, to find that a Second Empire is spreading among the stars.

Michael Glover has been given a new life but he is searching for a new mission, something to do that he feels is worth doing. With an advanced First Empire ship at his command, posing as an itinerant merchant captain, he wanders from world to world, buying, selling and building a new, very unorthodox crew.

He quickly finds that the new Empire is not so different from the old, and the challenges that he faced, all those years ago, are the same challenges that a soldier must face on any world and in any era.

The Second Empire is threatened by unknown forces and Michael Glover, a soldier who could always be counted on, is ready to step up and face the challenge.