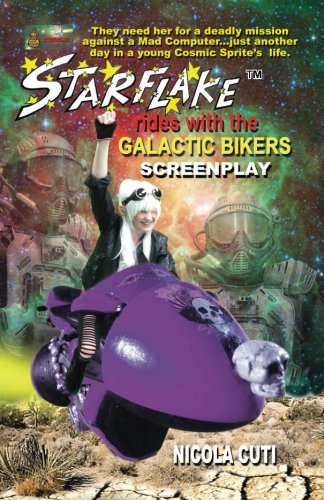 about this book: A rogue team of four Deep Space Ranger Cadets, mounted on rocket cycles, are on a mission to rescue their fellow cadets who are trapped on the planet Kafka, under the control of the mad alien computer, ALIEC. When they run across Starflake (Star), a feisty little girl who doesn't need air to live, they see in her a being who can maneuver the slim vent leading to ALIEC and not be bothered by the poisonous atmosphere surrounding ALIEC. Thirsting for adventure, Star joins the Bikers. As a parting present, Bonoguro, Star's teacher, aka, The Big Jelly, gives her a mind coin with instructions not to use it on intelligent beings.

The Bikers land on Kafka and set up camp. At first, they want Star to take a bomb to ALIEC, but since they have begun to care for her, they think it's too dangerous and decide to use a remote control bomb. When their fellow cadets, under ALIEC's mind control, attack them Star decides to take matters into her own hands. She crawls through the vent to ALIEC's chamber uses Bonoguro's special mind coin to drive ALIEC totally insane.

This is the screenplay of the novel of the same name.