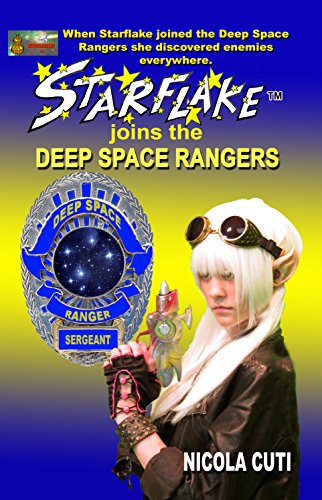 about this book: In order to help a fellow Cosmic Sprite, who is Deep Space Ranger, Starflake captures and delivers a dangerous criminal to DSR Headquarters. General Chu, leader of the DSR Academy, is so impressed with the girl, who can live anywhere in outer space without the aid of life support, she offers to support her entrance to the Academy as a cadet. Star is not sure she wants to give up her freedom but she is willing to observe the DSR. Harassment from the cadets and the harshness of training, makes her think she will never be a cadet until she proves her worth on a deadly mission. With the growing fleet of a pirate armada, she becomes the only hope for a DSR spy aboard the pirate flagship. Star devises a scheme to use a gynoid of herself to deceive the pirate admiral while she arranges to become the scourge of the spaceways as the infamous Tauristar. However, the pirate admiral knows Starflake and will not be easy to fool.

After spending 55 years as a writer and artist for comics and animation, I retired to write what about what I loved since I was a child, space opera. I began a series of books based on my childhood heroes, Captain Video, Buzz Cory of the Space Patrol, Rocky Jones Space Ranger, and Flash Gordon. A close friend suggested a series for young girls and so I created Starflake. Thus far I have completed seven Starflake novels and I'm working on more. Although the science is exaggerated, for the sake of a good yarn, most of my work is based upon the discoveries and theories of the most brilliant minds of our time; Stephen Hawkings, Michio Kaku, and Neil deGrasse Tyson. The series was written to inspire girls but there are enough action and adventure to interest boys and adults as well.

Denise B. of Kids First! Quality Media for Children has written: "This script (Starflake rides with the Galactic Bikers) is more than just a sci fi thriller that entertains, it teaches about friendship and acceptance. The characters are the strongest aspect of the film but the story line is also creative and flows well from beginning to end."