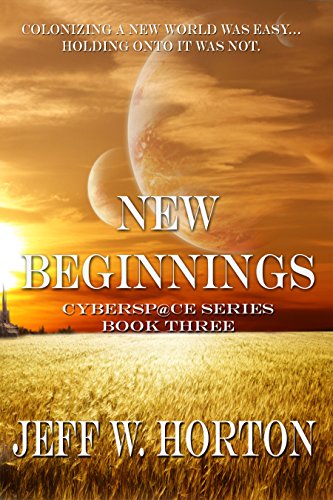 about this book: NEW BEGINNINGS is the third book in the Cybersp@ce series.

Like Gene Rodenberry's original Star Trek series, New Beginnings offers us a positive vision of the future, a version in which humanity will overcome the differences that divide us, enabling people to start exploring our vast universe. In New Beginnings, the Earth Space Alliance is setup with a form of government that mimics that of the United States, but on a global scale. When the Earth is nearly destroyed by an Extinction Level Event, it launches an effort to colonize another world.

I wrote New Beginnings as my vision of where we would be within our lifetime, should we successfully reverse-alien technology capable of interstellar flight. A new, virtually unlimited power source and the technology to expand out into the cosmos would enable humanity to set aside pretty squabbles over limited resources on Earth, concerns over overpopulation, etc.