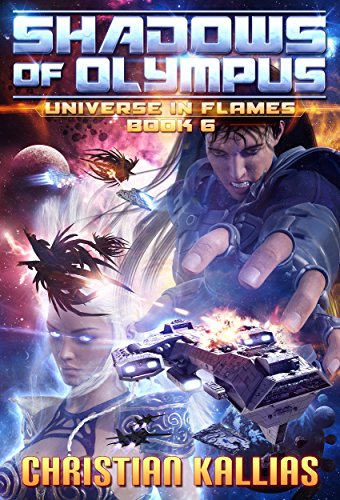 about this book: Shadows of Olympus deals with the fallout from the previous book, namely the arrival on the scene of another AI, a fork from Gaia, with an older version of her code, called Gaia 2. Gaia 2 drives Chase and the rest of the Alliance away from Earth and immediately goes to work to try and assimilate the original Gaia and take control of the planet.

The Alliance is in bad shape, and our heroes haven't been in such a bad position in a very long time. They must split to achieve different yet crucial goals if they want to rebuilt and survive.

Shadows of Olympus introduces a new Fury character and also fleshes out the backstory. As always I've tried to enrich the universe while keeping the reader glued to the book with multiple storylines, high stakes, and suspense.

I think the book will appeal to fans of both Space Opera / Military SciFi but also Fantasy fans. As always I had a mythological element in this series that I think distinguishes them from the rest, or at least so have I been told by my readers and fans.

I'm also really happy with the cover I've made for this book. And even more happy that it took a lot less time than many of the other books. I guess I'm getting used to working faster on artworks.

As with all my latest books, I've used both an editor and proofreader, as well as beta readers.

I'd like to thank my readers and fans and hope they'll enjoy reading this book as much as I did writing it.