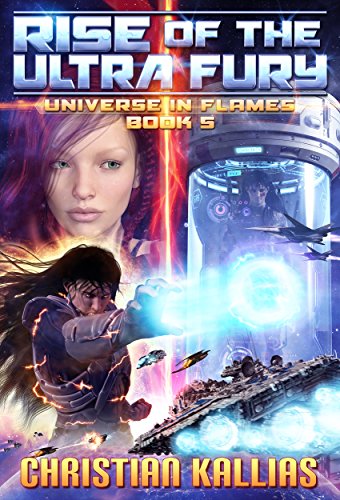 Book: Rise of the Ultra Fury (Universe in Flames Book 5) by Christian Kallias

about this book: As Chase is mortally wounded following his deadly fight with elite Fury warrior Miseo, he is put into suspended animation inside a cryostasis tube, only seconds away from death. Meanwhile Sarah has to make a very important decision presented by her yet unborn child Chris, which precog and telepathic abilities in the womb allows him to talk with his mother. Does he sacrifice himself before being born to save his father, or do they trust that they can bring Chase back without his intervention? Ares learns of an Olympian who can help him save Chase but to get to him won't be easy, and may require him to forge an alliance with the most untrustworthy character, but does he really have a choice?

Meanwhile, Ryonna, with the help of friend and ally bounty hunter Keera go on a mission to find her brother-in-law who might have just stumbled into a vital piece of technology, one that could help the Earth Alliance in their war with the Furies.

As soon as Miseo returns back to Erevos, he is given command of the first battle ready Fury super destroyer with the mission to eradicate the Earth Alliance once and for all. Can The Earth Alliance survive this attack? And at what cost?

I started the Universe in Flames series just one year ago, with Earth Last Sanctuary (first book, now FREE on multiple platforms like Amazon, B&N, Kobo, iBooks & smashwords, links to all editions here: http://www.christiankallias.com/#!earth-last-sanctuary/n5xwe ) as a straight up Space Opera series with Greek mythology woven in the plot. It has since evolved into more of a cross-genre saga, dipping into Fantasy as well as Supernatural territory while never forgetting it's main space opera roots. Fans of military science fiction, galactic empires, first contact and supernatural with power driven characters should feel right at home reading this series. Since book 3 there is also Artificial Intelligence thrown in the mix. As the story expands, things get more and more complicated for the Earth Alliance.

It took around 3 months to write, have it edited and proofread, this time around I used three separate proofreaders in order to try and catch as much mistakes as humanly possible for the time and budget at my disposal. In my opinion it's not because a book or an author is indie that it means it's forgivable to release an unfinished product and I always do my best to release the best product I can under tight (self-imposed) deadlines.

Looking back at my first year as an author I have learned a lot. First I never imagined that I could be releasing no less than 6 books (5 full novels and a novella) in this universe. I had planned 3 books a year, but I'm really happy to have managed to blow way past that. Of course the first one doesn't really count here, it took 11 years to complete... still, it's definitely been a very busy 12 months since June 21st 2015.

The title has changed several times during the writing, it was initially called Path to Redemption (Rise of the Legendary One), but since I didn't like the idea of a subtitle, I decided in the end to rename it to Rise of the Ultra Fury.

As is the case with all of the books in the series, be ready for some surprising cliffhanger ending. I guess I got this habit from watching TV-series and how they end their season finale in such fashion. That's also why I work around the clock to make sure my readers don't have to wait to long to get the next part of the story.

Book 4 (The Beginning of the End) was a very action oriented, action packed, heart-pounding and suspenseful affair, one that left little place for me to explore Chase's psyche of the situation, as he was always on the run and fighting Furies on planet Droxia. I therefore decided to explore this further and more in depth in this book, while maintaining the usual action, epic fight scenes, suspense, thrills and surprises that are the hallmarks of this series.

As with previous books I always enjoy depicting epic space battles, with large fleets battling and the use of original out of the box thinking strategies.

I hope my readers will appreciate this book and have as much fun reading it as I had writing it. The story has become quite more complex than I initially thought it would be when I started the series, but I think this is for the best. While Earth - Last Sanctuary was mostly a linear book with very little in terms of sub-plots, every sequel has become more complex, webbing more sub-plot stories into the main plot for greater complexity. It's really been journey for me and I can hardly recognise my writing from the first book, I feel I've learned so much, an hopefully, improved as well in my storytelling. While Earth - Last Sanctuary was a true milestone in my life: the first ever finished project (tried video games in the 90's, manga/comics after the millenium), and for that reason alone it will always have a special place in my heart. But looking back I think I can tell with near absolute certainty that my craft has improved with each and every new book, and that alone is super exiting as a writer.

I wish to thank my readers for keeping buying and reading my books, you humble me and I want to thank you for the bottom of my heart. As always please feel free to contact me if you want to talk about the books or anything else, I really enjoy chatting my with readers.

Please note that I will offer this book or any other book I wrote in exchange for a fair review on amazon, so if that's something you'd be interested in, please contact me by using my website's contact page. http://www.christiankallias.com/#!contact/c1kcz