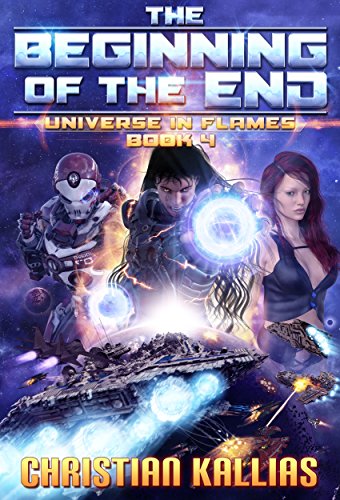 Book: The Beginning of the End (Universe in Flames Book 4) by Christian Kallias

about this book: With the resurgence of the Furies, the universe is thrown into chaos and fear as the enemy of old loses no time conquering ressource rich worlds in their quest of rebuilding their once legendary fleet.

In the meantime Chase is training heavily in order to be able to match them on the battlefield. He is haunted by the weight of his actions and the role he unwillingly played in helping Argos free the Furies.

When a distress call is intercepted from Alpha Prime: it brings hope to Chase and his friends who all thought their world had fallen during the initial Obsidian-Zarlack attack on the Star Alliance.

The Furies go on the offensive and their utterly destructive power soon claim lives by the billions. Can Chase find a way to stop the Furies from plunging the universe into chaos?

I've always been fascinated with science fiction, and when the time came to decide on what type of books I would write, it was really a no brainer to pick a genre. I am a lover of Star Wars, Star Trek, Stargate, Aliens, Babylon 5, Predators & Farscape to list only a few. Lately I've really liked the new SciFi shows that graced TV like Dark Matter, Killjoys and The 100. I'm also a fan of video games and was greatly inspired by the Wing Commander series of games when it came to dogfights, a fact that should be apparent in my depicting of dogfights in my books. Also a fan of animes like Dragon Ball Z & Saint Seiya, so supernatural battles as well as mythology are also contained in my writing. Also being a fan of Fantasy (including RPG games), you'll find elements from this style in my books as well.

As with my previous books, I made the artwork for The Beginning of the End. I'm really happy with the result, especially the fact that characters are now featured on the cover so that my readers know what to expect (superhero/supernatural fights) besides the large scale military fleet battles that is still a recurring theme in my series.

I think readers who enjoy both Space Opera and epic one on one battles with superpowers will really enjoy the Universe in Flames series. I also like to keep suspense running high in my books and I think I've managed to reach yet another level with The Beginning of the End. It is a relentless book with very little downtime when action and suspense are concerned. I hope my readers will have as much fun reading this next opus as I had writing it.

I would like to thank my readers and encourage them to review the book once they've read it. Please consider telling your friends and colleagues about it if you read my work, your recommandation is the best way for more people to read my books and I thank you from the bottom of my heart for your help.

Please consider joining my newsletter on my website so you can be informed the moment my books are released, as well as have access to additional content. I've started writing an Heroic Fantasy series that you can access for free, on a chapter per chapter basis on the website. It's called The Kyrian Chronicles and I hope you'll enjoy them as well.