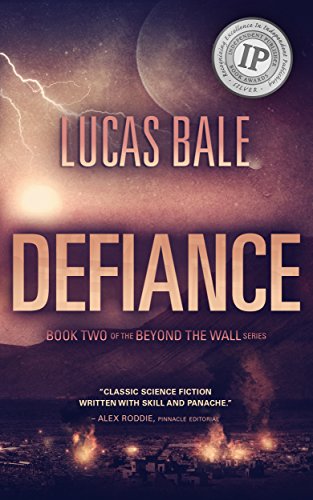 Book: Defiance (Beyond the Wall Book 2) by Lucas Bale

about this book: Defiance is the award-winning second book in an epic space opera, which tends towards the harder end of the science fiction scale, called Beyond the Wall. Science fiction and fantasy has inspired me since I was a boy – Haldeman's The Forever War, Asimov's Robot and Foundation series, Herbert's Dune, Gibson's Neuromancer, Tolkien's The Lord of the Rings, Robin Hobbs's Farseer Books. SFF allows us to explore what possibilities lie in wait for us in the future and how we will end up influencing that future. The stars fascinated me as a boy and I could think of nothing more exhilarating than being up there among them. Currently, there seems to be a renewed thirst for knowledge of what is out there – it's a great time to be writing science fiction. That's what readers will find in this series – classic, inspiring science fiction.

Beyond the Wall is as much about government and civilisations, and their rise and fall, as it is about reconciling the age and scale of the universe – the vastness of the unknown that waits for us in the black. That becoming part of that huge scheme doesn't even begin until you take those first steps into the unknown, but that the reality is that we as a species may be hugely under-equipped to deal with it. The most important theme for me is what it means to be human. What is essential for society to function. Where our future lies and who will be. Justice, honour, integrity, sacrifice – these are nebulous concepts and the truth of them differs depending on our perception, even our mood or stage in life. We grow and develop as people, and what is important to us, how we value these concepts, changes as our experiences mould us. I think post-humanism is going to become more and more important as a concept in future – what we as a society will find acceptable as bioengineering, in its widest sense, develops. Also, I'm very intrigued by the question of how all that relates to artificial intelligence – sapience, in particular. What it means to be "alive" instead of just human. How we will treat artificial constructs who may one day have desires and motivations that are self-defining. This will determine who we become as a species, and how other species treat us.

I think Beyond the Wall is for anyone who read classic science fiction and loved it. I hope that fans of John Scalzi, Peter F Hamilton, Alastair Reynolds, James S. A. Corey and Iain M. Banks will find something to love in there.