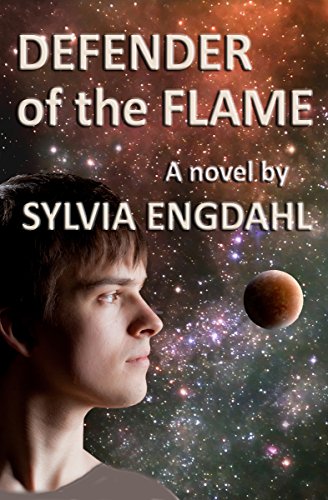 Book: Defender of the Flame - A Novel (The Rising Flame Book 1) by Sylvia Engdahl

about this book: This novel and its sequel Herald of the Flame grew from a previous duology which dealt with how the colony Maclairn was founded two hundred years earlier. I hadn't planned to write any more about Maclairn, but I suddenly got the idea for a new story and couldn't put it down. Then, months after its publicaton, it dawned on me what might very well happen to the hero in later years, and realized that readers would like to know that it happened. I then wrote the sequel faster and with less difficulty than any of my other books.

These two are the last and least-well-known of my novols, yet I think they are the best for adult readers to start with. Unlike many, they were never issued as YA books and are not appropriate for kids under 16 (except insofar as some kids under 16 already read adult science fiction). Moreover. they're less controversial and faster-moving than my first adult novel Stewards of the Flame, so many readers prefer them. For this reason I don't call the four books a series. Nobody wants start with Number 3 in a series--and there were people who didn't like Stewards of the Flame and might not read them if tthey were presumed to be the same. The only disadvantage to starting with Defender of the Flame is that the backstory it includes contains spoilers for the earlier duology, so you should read that first if you plan to read them all. (But skip Stewards if its controversial theme doen't appeal to you; its sequel Promise of the Flame can stand alone.)

It's hard to write anything about this duology because to mention one of its main elements would be a major spoiler. I will merely comment that it has mere themes than its keywords reveal. That said, it's about the development of telepathy and other psi powers as a step in human evolution, and will be of special interest to adults who have enjoyed my YA novels Enchantress from the Stars and The Far Side of Evil because it takes a similar view of those powers and of humankind's place in hte universe.