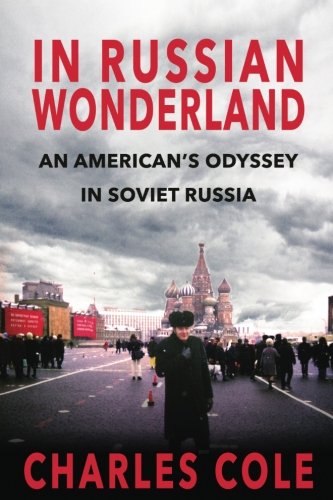 Book: In Russian Wonderland - An American's Odyssey in Soviet Russia by Charles Cole

about this book: This book describes in narrative format my experiences serving as a Russian-speaking guide on a U.S. Government cultural exchange exhibit in a number of Soviet cities back in 1972. It shows what daily life was like for millions of Soviet citizens in a society completely dominated by an all-powerful central government – the society which produced Vladimir Putin and his contemporary Russian Government colleagues. I chose the title to incorporate the word "Wonderland" which, in addition to being the Russian term used to translate Lewis Carroll's work "Alice in Wonderland," was also the derogatory term dozens of Soviet emigres with whom I worked for 30+years to describe the "wonderful" place where they had grown up. I was able to write this book after finding a stack of letters I had written home from the USSR and which my mother had kept all these years. I was also able to digitize over 70 of the 35mm pictures I took throughout the USSR during this trip and include them at the end of each chapter to give the reader a better understanding of what Soviet society of that era looked like. I was inspired to write the book to help Americans understand the roots of modern Russia, as well as develop better insights into the policies and actions of Putin's government and the Russian press (RT) which disseminates Putin's views, much in the way the old Soviet press did. The book is also intended to be a warning from history of what can happen when too much power is concentrated in too few hands and the resulting reality with which millions of Soviet citizens had to contend in their daily lives. I only wish more Americans had been able to see what I saw and experience what I did in the Soviet Union. This book helps them do that.