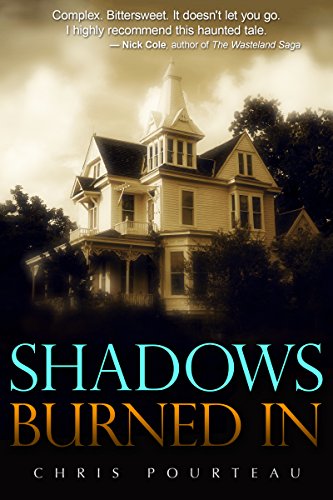 about this book: William Faulkner once famously said, "The past is not dead. In fact, it's not even past."

Shadows Burned In tells the story of three generations of the Jackson family. David Jackson is a successful Houston lawyer who moves his wife, Susan, and daughter, Elizabeth, to his hometown of Hampshire, Texas, a typical small town 70 miles to the southwest of Houston. In theory, David has made this move to shield twelve-year-old Elizabeth from the seedier side of big-city life. But he can never really answer Susan's increasingly frustrated question: Why did they have to move to such a small town that holds so many bad memories from David's childhood in the first place?

To escape their feuding, Elizabeth explores the once-elegant home of Old Suzie, the object of local gossip and whispered tales of children in years gone by. Though Suzie is long dead, her abandoned home seems to simmer with phantoms from Hampshire's past. Events in the house serve as a spiritual catalyst that helps the Jackson family come to terms with its own dysfunctionality. Ghosts, the misperceptions of society, and the persistence of the past in the present--these conventions frame the complex relationships between the characters in the novel.

In short, Shadows Burned In is a book of redemption and second chances that argues that--perhaps--we can break transgenerational cycles of abuse and change ourselves, though not without the hard (sometimes seemingly impossible) work of reinventing the very essence of who we are.

• Review by Bridget Young: "Great read!... from old ghost stories to a teen's struggle for acceptance and love the stories haunt while maintaining a glimmer of hope for the future."

• Review by David M. Brown: "This is one of those hard-to-put-down novels ... The writing style is vivid and compelling."

• Review by Supergenius: "The author does a great job of developing the characters, and they stay true to themselves, which is refreshing ... [Speaking] as a former English teacher,...this story would actually lend itself to teaching the different literary aspects while keeping students' attention."