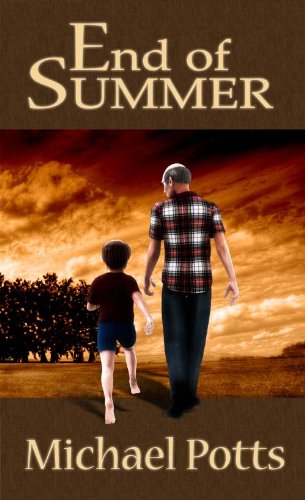 about this book: End of Summer is an intimately personal book that reveals parts of myself that I have always been afraid to reveal. It is Southern Fiction, but fiction with a strong autobiographical streak. There are differences from real life, of course—in the book, the main character's, Jeffrey Conley's, parents were killed in an automobile accident when he was two-years-old. In real life, my parents are still living. My desire was to focus on Jeffrey, who like me, had a fraternal twin who died two hours after birth, and Jeffrey's relationship with his beloved granddaddy.

It is through the adult Jeffrey walking through his grandparents' field that the reader travels back in time to Jeffrey's ninth year. It is a voyage of recovery—of hope and faith—and discovery of how a man with Asperger's Syndrome, a mild condition on the autistic spectrum, developed his obsessions as a child. As both a child and an adult, Jeffrey is obsessed by death, having faced it so much as a very young child. As an Asperger's child (though not being diagnosed until he was in his 40s), his obsessions grew and became fixed in his mind—an obsession with the heart—with what causes the heart to stop when a person dies in every conceivable illness or injury—and as an adult, with a sexual fetish with listening to a woman's heartbeat.

These "quirks" add an element of "Gothic" to the Southern fiction—but they remain my own obsessions to this day—and thus the book became therapy for me, a source of self-understanding. In End of Summer (referring to the end of the summer of Jeffrey's ninth year—and to the loss he will face at the end of that summer), Jeffrey faces the death of a loved one in a way he has not experienced it before. As a middle-aged man walking toward The Thicket—a special place where he and his granddaddy would play when Jeffrey was a child—he will seek the hope and faith that death stripped from Jeffrey at age nine.

During his journey we relive a Tennessee summer in 1968—Sunday dinners, hell-fire and brimstone sermons at church, fresh crops from the garden, tree swings, bike rides, and visits to the town square. Those happy moments helped Jeffrey to bear earlier losses—but can he bear the most painful loss of all? At the end of his adult journey to The Thicket, it is not only the understanding he gains that is important—it is also the understanding he gains about life—and about death. In the end, the book is hopeful.

Video 1: The author readr parts of chapters 1 and 2 of "END OF SUMMER"
Video 2: End of Summer, Uncle Frank