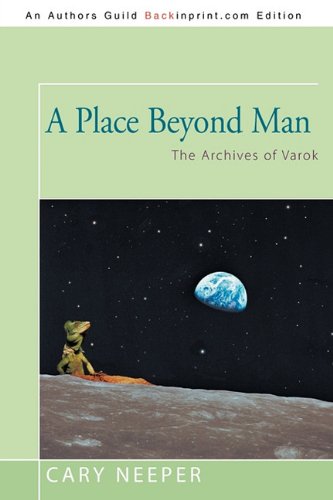 Book: A Place Beyond Man - The Archives of Varok by Cary Neeper

about this book: This is my first novel, published in 1975 by Charles Scribner's Sons, Dell and Millington, London then re-released as an Author's Guild Backinprint.com Edition and printed by iUniverse in 2011 (with limited choice of covers). The title used the word "man" meaning human, not politically incorrect at that time. It was meant to indicate that we are not alone in this huge universe. It is a first contact soft science fiction story with fun aliens inhabiting our 21st century solar system and agonizing over Earth's rush to use up all its resources and overpopulate the place. Jean Bolen, the author/psychiatrist, read it, said she had just read another manuscript dictated by channeling and was wondering if I had had any odd experiences. I told her that Conn, the aquatic alien protagonist, had run away with the story. Jean said that it was "...a perfect metaphor of Jungian individuation." It focuses on the human's problems learning to deal with the aliens--at first attractive, then horrible, and finally as they really are. My editor at Scribner's, Harris Dienstfrey, sent a long letter listing 20 things that I needed to fix. Each one required me to scan and fix the entire story. I learned a lot under his tutelage, a rare thing these days. The 2011 edition was created by scanning the original. I couldn't change a thing.

Readers of the current edition seem to agree that the environmental issues Conn and the human microbiologist Tandra fussed about are still relevant. In the 90's I decided to try revising it and correcting some of the errors, and after Penscript Publishing House releases the related stories in The Archives of Varok, they plan to release the revised version, complete with what I have learned about making a page-turner since then. The Webs of Varok is the second book in the series, a direct sequel to APBM but also a standalone fiction.