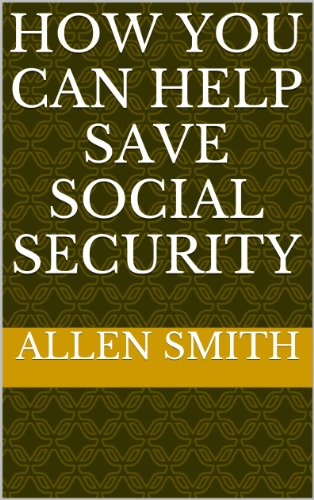 Book: How You Can Help Save Social Security by Allen W. Smith, Ph.D.

about this book: The primary two purposes of this book are:

1) To educate and inform the public about an impending crisis that has been hidden from most people for the past three decades.

2) To call the 78 million baby boomers, and all others who care about the future of Social Security, into action to help save Social Security as we now know it. The baby boomers have accepted the call to action for various problems throughout most of their lives. But this may well be the time you are needed most. Over the past 30 years, the government has embezzled every dollar that is supposed to be in the trust fund and spent the money on other things. The trust fund contains no real assets, and Social Security is running large deficits every year. The only real solution is for the government to pay back the $2.7 trillion it has taken from Social Security, and spent on other things. . If this were to happen, Social Security would be on a sound footing for the next 20 years. But the government has no intention of repaying the money unless they are forced to do so by pressure from the public.

In early 2000, while doing research for a book, I stumbled onto the government's big, dirty secret. It was hard to believe, but, after doing extensive research, there was no doubt that the government was doing the unthinkable. It was channeling the surplus Social Security revenue into the general fund and using it as general revenue. In September, 2000, I had the opportunity to appear on CNN to discuss my newly published book on the subject, The Alleged Budget Surplus, Social Security, and Voodoo Economics. I tried my best to convince Atlanta Anchor, Lou Waters that the government was at that time using Social Security money for other purposes. But Waters would have no part of it. He treated it like a big joke, and asked me, "Are you a voice crying in the wilderness?" That appearance on CNN thirteen years ago marked the beginning of my relentless campaign to expose the Social Security fraud. I hope you will read this book and participate in the inevitable public protests that will be forthcoming. I would like to see millions of people carrying signs and chanting, Pay the Money Back! Pay the Money Back!! Pay the money back!!!