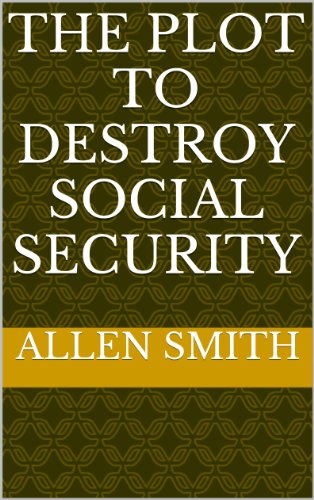 about this book: Social Security has had enemies since the day it was enacted into law in 1935. But these enemies were not strongly organized or highly funded prior to 1983. However, in 1983, the conservative Cato Institute and the Heritage Foundation joined together in launching a real war against Social Security. They published in the Cato Journal a detailed plan of how to destroy Social Security. The plan (or "plot") was co-authored by Suart Butler (a Cato director) and Peter Germanis (a policy analyst at the Heritage Foundation), and published in the Fall 1983 issue of the Cato Journal. The plan was titled, ACHIEVING A Leninist STRATEGY.

The Article, outlining the plot, begins with a comparison of the views of Marx and Lenin with regard to the belief that capitalism was doomed by its inherent contradictions. According to Butler and Germannis, Marx believed that capitalism would inevitably collapse on its own. However, Lenin wanted to mobilize an alliance , both to hasten the collapse and to ensure that the results conformed with his interpretation of the proletarian state. Butler and Germannis state that, Unlike many other socialists at the time, Lenin recognized that fundamental change is contingent both upon a movement's ability to create a focused political coalition and upon its success in isolating and weakening its opponents

The plan that President George W. Bush advocated for privatizing Social Security in 2005 was based on the Cato plan. The Bush plan, was almost an exact match of the recommendations that were published in the Cato Journal in 1983 under the title, Achieving a Leninist Strategy.Bush's

Bush's 2005 attempt to privatize Social Security failed, but we have not seen the last of the enemies of Social Security trying to privatize the program. The movement, started by The Cato Institute and the Heritage Foundation in 1983, has grown massively in both the number of supporters and the massive financial backing by the Koch brothers and many other billionaires. They are following a plan that they hope will eventually succeed just as Lenin's plan to destroy capitalism in Russia succeeded.