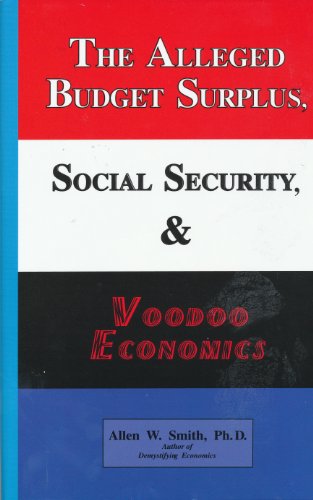 about this book: The Alleged Budget Surplus, Social Security, and Voodoo Economics was the first in a series of five books on the looting of Social Security that I have written during the past 13 years as part of my relentless campaign to alert the public that $2.7 trillion of the money that is supposed to be in the trust fund today has been looted by the government and spent to fund tax cuts for the rich, unfunded wars, and other programs. . This was the most urgent book that I have ever written. In the spring of 1980, while doing some research, I stumbled onto a massive fraud involving our government and the surplus Social Security revenue that was being generated by the 1983 payroll tax hike.

Like all other Americans, I did not know anything about the government's secret spending of Social Security money for general government operations before I accidentally stumbled upon it while doing research in early 2000. The first hint that something might be wrong came from a small pamphlet I found, which had been written by an employee of the Social Security Administration, who was apparently trying to become a whistle blower in an effort to get the secret he knew about out to someone in the public. According to the pamphlet, all surplus revenue coming from the 1983 payroll tax hike was being diverted to the general fund where it was being spent as general revenue just like income tax revenue. An even more serious allegation was that the government was not paying any real interest on its huge debt to Social Security. According to the writer of the pamphlet, the government "paid" interest by simply issuing even more of the same worthless IOUs that were already in the trust fund.

I found the pamphlet intriguing, but thought the pamphlet was probably not correct in its assessment of the situation. It might have been intended just as a joke. It just did not seem credible to me that the American government would be stealing money from Social Security and using it for funding large income tax cuts for the very wealthy. I wasn't convinced that the accusations in the pamphlet were true, but if they were true, I had to find the proof and relay my findings to the general public.

The first step was to search for articles or editorials published at about the time that the 1983 legislation was signed into law as well as in the years immediately following passage. I also searched the Congressional Record to see if there were any debates about the subject in Congress. I thought my search might be like looking for a needle in a haystack, but it didn't take me very long to find real pay dirt, and a lot of it. It turned out that a few courageous United States Senators had figured out what was going, and they stirred up quite a fuss. The three most vocal senators on the issue were Senator Danel Patrick Moynihand (D-NY), Senator Ernest (Fritz) Hollings (D-SC), and Senator Harry Reid (D-NV). And everything they said on the issue of Social Security was recorded for posterity in the Congressional Record.

On October 13, 1989, Senator Hollings lambasted the Bush administration for its use of Social Security surplus dollars for funding other programs. Excerpts from the speech are reproduced below from the Congressional Record {Page. S13411}.

The most reprehensible fraud in this great jambalaya of frauds is the systematic and total ransacking of the Social Security trust fund in order to mask the true size of the deficit. The Treasury is siphoning off every dollar of the Social Security surplus to meet current operating expenses of the Government. The hard fact is that, in the next Century, the Social Security System will find itself paying out vastly more in benefits than it is taking in through payroll taxes. And the American people will wake up to the reality that those IOUs in the trust fund vault are a 21st century version of Confederate banknotes."

Nearly a year later, the looting of the trust fund was continuing unchanged. On October 9, 1990, Senator Harry Reid expressed his outrage at the practice during a senate speech. Excerpts from the speech are reproduced below from the Congressional Record {Page: S14759}.

The discussion is are we as a country violating a trust by spending Social Security trust fund moneys for some purpose other than for which they were intended. The obvious answer is yes…I think that is a very good illustration of what I was talking about, embezzlement, thievery…During the period of growth we have had during the past 10 years, the growth has been from two sources: One, a large credit card with no limits on it, and two, we have been stealing money from the Social Security recipients of this country.

President George H.W. Bush .was furious over Moynihan's proposal. He told reporters, "it is an effort to get me to raise taxes on the American people by the charade of cutting them….and I am not going to do it.". Moynihan's proposal was supported by both liberal and conservative organizations. But, President Bush used every power at his command to defeat Moynihan's legislation, so he could keep his large slush fund, which could be spent on whatever Bush chose to spend it on.