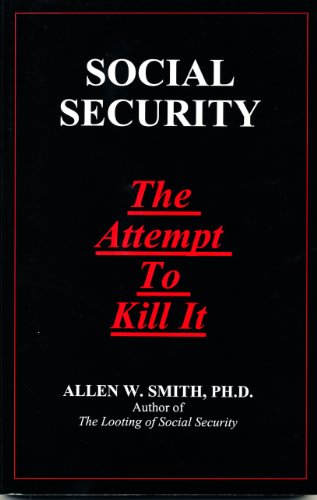 Book: SOCIAL SECURITY - The Attempt To Kill It by Allen Smith, Ph.D.

about this book: The Plot to Destroy Social Security:

book, The Looting of Social Security, which had started out selling well, suddenly and mysteriously had disappeared from bookstores and Amazon.com. Somebody had decided that, since my book might negatively affect Bush's privatization campaign, the book should be censored and removed from the market. So I was trying to get back into the game by publishing a new book.

The primary focus of the book is, The Plot to Destroy Social Security. The playbook upon which President Bush's strategy for privatizing Social Security was based on an article written, in 1983, by Stuart Butler (a Cato director) and Peter Germanis (a policy analyst at the Heritage Foundation) and published in the Cato Journal, vol. 3, no. 2 . (Fall 1983). The title of the article is ACHIEVING A LENINIST STRATEGY. The article begins with a comparison of the views of Marx and Lenin with regard to the belief that capitalism was doomed by its inherent contradictions. The co-authors wrote,
Unlike many other socialists at the time, Lenin recognized that fundamental change is contingent both upon a movement's ability to create a focused political coalition and upon its success in isolating and weakening its opponents.

Butler and Germanis urged the adoption of a similar strategy for reforming Social Security. They advocate a specific set of plans for accomplishing the goal of replacing the existing Social Security system with a private system. They propose using guerrilla warfare against both the current Social Security System and the coalition that supports it. They argue that: "The business community, and financial institutions in particular, would be an obvious element in the constituency. Not only does business have a great deal to gain from a reform effort designed to stimulate private savings, but it also has the power to be politically influential and to be instrumental in mounting a public education campaign.

The plan, published in the Cato Journal in 1983, served as the basis for President George W. Bush's 2005 privatization campaign, and it continues to be the master plan for ending the current system. The basic plan had two main components: 1) the companies that stand to profit from privatization—banks, insurance companies, and other financial institutions—must join the alliance; and 2) Guerrilla warfare must be waged against both the current Social Security system and the coalition that supports it.

Today both objective have been fully accomplished. Thomas B. Edsall of the Washington Post wrote an excellent article about the alliance in the February 13, 2005, issue of the Post. He writes "The business alliance is fully on board in the drive to create partially private Social Security accounts. The campaign is being funded largely with money set aside by major corporations. The number of conservative organization supporting the privatization of Social Security, and the size of their bankroll for accomplishing the mission is staggering." Edsall quotes Edwin J. Feulner, president of the Heritage Foundation as saying, "Conservatives intend to fix Social Security, welfare and Medicare—the very problems that liberals created. And we'll do so no matter how often the lefts yells, Stop" . . .