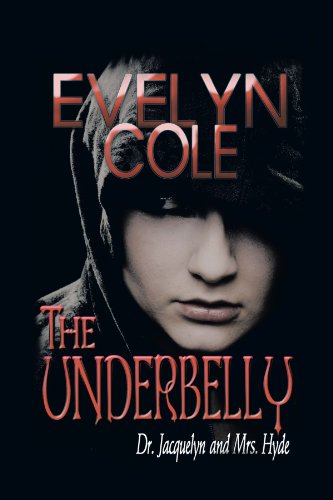 about this book: The Underbelly is about social class, a typically taboo subject in the United States. It is also about compulsive obsessive behavior and the relationship between the two main characters. One, Trishita, is the illegimate daughter of a visiting college professor from Scotland. She lives in the slums but craves a college education and a "downtown" career instead of bartender in her neighborhood. When she finally does get to college she tells her favorite professor, "The language of my thoughts is different from the language I speak."

The other, Jacquelyn Hyde, is the assistant superintendent of a large school district in the suburbs. Employees call her "Dr. Jacquelyn. She has a Ph.D but is obsessed by people's collections, such as Lalique figurines, and once a month becomes a cat burglar to destroy them.

She hires Trishita as a live in maid. Trishita takes over the household through her gourmet cooking, learned on the spot through Jacquelyn's collection of cookbooks.

I wrote this novel for its inherent humor, my curiosity about social classes as well as the common need to collect things.

In the case of a split personality, one side, if a man, might kill others. I figured a woman so afflicted would just destroy things.

I've noticed that well-respected private Universities in large cities are often surrounded by slums that house the latest wave of immigrants, that trauma in early childhood may result in compulsive behavior that seems out of context, and that social class is often self-defining.

Writing this novel helped me examine these concepts.