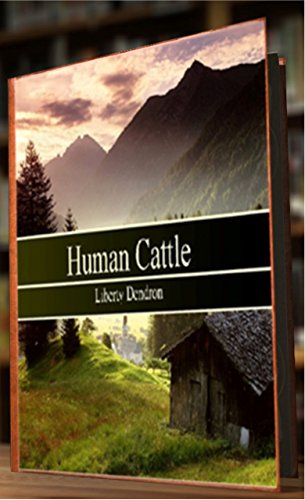 about this book: His arguments, his rage, and his passion are overwhelming and expressed with superb style, with masterful timing and suspense. Liberty Dendron denounces exploitation with uncompromising ferocity, yet this book is almost poetic in its description of solidarity and human capacity for survival in the midst of the worst kind of exploitation. There is a mysterious power in Liberty Dendron's story-telling.

Human Cattle is a powerful saga of three generations of slave women. Set in 1857 by Liberty Dendron, Human Cattle digs deep to bring the story of slavery in the South full circle—from concealment to recovery. A powerful masterwork of passion and scholarship. A stunning literary achievement that brilliantly illuminates one of the most extraordinary events in the long, dark history of slavery in America.

Human Cattle forces readers to reckon with the violence at the root of American white supremacy, but also with the survival and resistance that brought about slavery; it also created a culture that conflicted with America's deepest dreams of freedom.

Slavery helped finance the Industrial. Plantation owners, shipbuilders, and merchants connected with the slave trade accumulated vast fortunes that established banks and heavy industry in and expanded the reach of capitalism worldwide.

The expansion of slavery in the first eight decades after American independence drove the evolution and modernization of the United States. In the span of a single lifetime, the South grew from a narrow strip of worn-out tobacco plantations to a cotton empire, and the United States grew into a modern, industrial, capitalist economy. Until the Civil War, the most important American economic innovations were ways to make slavery ever more profitable. Through forced migration and torture, slave owners extracted continual increases in efficiency from enslaved African Americans. The United States controlled of the world market form cotton, the key raw material of the Industrial Revolution, became a wealthy nation with global influence.

Human Cattle is a compelling novel of love and redemption set during one of the darkest chapters of American history.