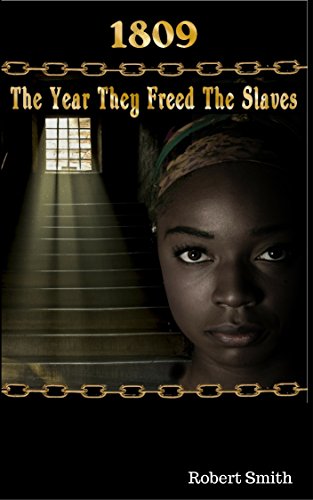 Book: 1809; The Year They Freed the Slaves by Jack Lourens

about this book: Atende is unique. Brought up in an African village, her father is Obeahmen, her mother N'ganga,the Shaman of their tribe.

"She was a pretty girl. No, she was a pretty girl with high cheekbones; glowing dark skin; wide eyes; all promising a very attractive woman in the future. She was only a child but lacked the innocence of youth. When she was five her mother gave her a monkey. It ha strayed from her mother and had come into the village. Like little girls do she petted it, groomed it and fed it. She did not give it a name, Later she cut of its paws and watched its short life end in a painful death."

Captured in Africa, and sold as a slave in Africa she is the catalyst that leads to Thomas Jefferson freeing the slaves in 1809. It is the story of the life she is forced into, how she learns from others and how others are influenced by her. To date the book has drawn a number of 5 Star reviews, but also one 2 star review. The reviewer found it a little gruesome! The book is about slavery and, yes, the first three chapters reflect the period. Like all my books it is not there just to entertain, hopefully they cause you to think.

Set against a backdrop of the fledgling United States where 1600 Pennsylvania Avenue was under construction, Lewis and Clarke were about to embark on their epic east to west journey across the United States, the Haitian slave rebellion and a religious revival. You now the title. The story is how we get there.