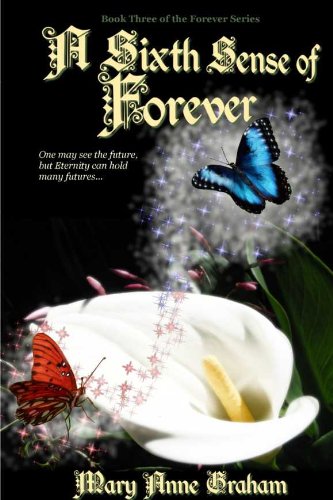 Book: A Sixth Sense of Forever (The Forever Series) by Mary Anne Graham

about this book: This book is chronologically the 3rd in my "Forever" series. The books can be read in any order and you can read just one -- or you can try! Like a certain brand of potato chips, you might plan to read one only to discover that no one can read just one. But this book is special - it's Boz's story.

My readers met Boz in "A Faerie Fated Forever." They got re-acquainted with him in "A Golden Forever." In this book, "A Sixth Sense of Forever," Boz finally meets his fate. Or rather, he'd met her long, long ago, and ran away from a future he couldn't claim. But one day fate, in the form of his best friends, the Malone brothers, knock at Boz's door. They are asking for a favor -- the overprotective brothers want Boz to teach their little sister, Lily, about sex. He should say no because if it goes too far, he might love her to death.

Beneath the famous Sedgewick honor lies an infamous secret. Despite popular wisdom, Sedgewicks do fall in love - they just can't marry for it. The unbroken line of unions for wealth and power wasn't spawned by respect for bloodlines, but rather by a centuries old faerie curse. Any woman a Sedgewick wed for love would die before she birthed a child.

Each duke betrothed himself to a woman he could never love and no Sedgewick betrothal had ever been broken. The luckier of the dukes lavished the love they couldn't risk for their wives on their mistresses. The current Duke of Sedgewick, Bozworth Harrison, wasn't lucky. Boz met the Malone brothers before he could lace his shoes and Lily shortly after her first breath. He didn't know when his fondness for the child changed to love for the woman. But he knew the favor he should refuse promised a taste of the forever he couldn't have and his sixth sense pawed like a fractious horse at the starting pistol.

Surely he could teach Lily about physical love, preserve her virginity for her future husband and still walk down the aisle with his cold, calculating fiancée. Couldn't he?

Fans of my work and my "guaranteed happy ending" philosophy might guess the answer. But getting there is half the fun, isn't it?

Yes, Boz thinks he's got lessons to teach Lily, but she's got a few for him too. Under the circumstances, what woman wouldn't?