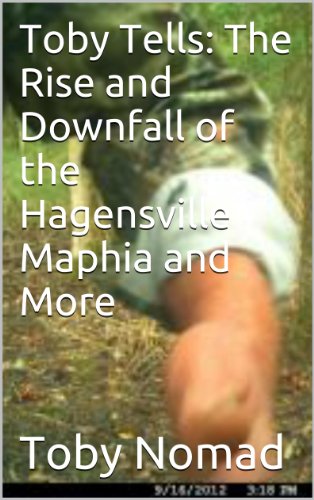 Book: Toby Tells - The Rise and Downfall of the Hagensville Maphia and More by Toby Nomad

about this book: This is a collection of light-hearted short stories as told by one of the main characters in the first story, Toby. The first story is about what happens when big-city crime ideas come to a backwoods town. "Maphia" is part of the joke. Other stories are about how a flagellant mule blows up an outhouse. How a stray dog whens the heart of a family matriarch. Two reformed strippers get into a brawl with two lady wrestlers. And my favorite, what happens when a stingy hunter refuses to share his peanut butter and cheese crackers with a brilliant squirrel. There are also a few others.

This book is pointed at anyone who just wants to read for laughs.

I don't really know how long it took to write the book. It started out as a dare from a friend whose story I was critting. I started popping jokes during the crit, and he encouraged me to do stand-up comedy. Not going to happen. I decided to write a blog instead. After doing that for a while, I combined those stories to make this book.

I initially wanted to title it "Toby Tales," but that was already a series about a dog. Since I wasn't about to change the name of my character/author, I went with the witness protection angle and Titled it "Toby Tells". I even have a blurb on the website: One man's pursuit of a writing career from the back of a converted school bus."

The cover came from an accident with a trail camera.

To anyone who spends the 99 cents buying this book,
Thanks for your time and money. I hope you get a laugh or two out of it. Don't expect it to be politically correct, and don't waste time thinking about it too much. You'll only get a headache. Toby Tells: The Rise and Downfall of The Hagensville Maphia may be offense to some sensitive readers. But you won't find any profanity or explicit sex in it.