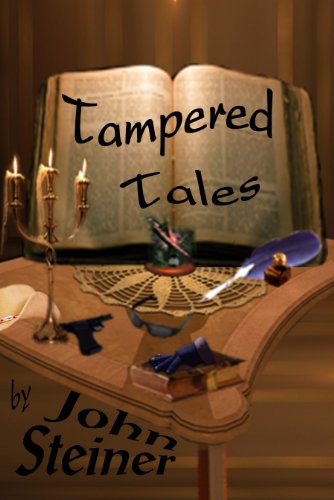 about this book: Thirteen tales of science fiction, fantasy, horror, comedy and- I kid you not, one true life adventure.

Each of these stories were originally written with the idea of submitting them to various fiction magazines. Then I discovered that getting accepted there was as hard as getting a publisher's attention. And so, after Squad V was accepted by Melange Books, I submitted these together as one book.

Some of them connect to an older series of science fiction novels I had created, but no longer intend to get published in that form. Four of the stories are based in whole or in part on dreams I've had. And then were was a real life waking moment as weird as anything to be found in James Thurber's satirical writings. This inspired me to emulate his style for the telling of the events as they physically unfolded over three days.

*** Theme I: The Other is a Mirror into Ourselves
The storyteller is an honest liar, for they admit fully to their fiction. However, a tale can be false, yet tell us the truth. For while the adventure speaks of "The Other," it reflects back upon us what we know to be within ourselves.

• Wry Folk
Oh, the age of innocence. A time in childhood where you could clap your hands and say "I believe in fairies."Then one such creature is found, only it's not a fairy and definitely not from this world. Six year old Jesse and her mother quickly learn that things which appear small, harmless and cute potentially bring with them more than one world's worth of trouble into the house. The binding ties of any civilization of any planet are that they fiercely protect their young and seek their safe return at all costs.

• Red Rover, Red Rover
People of the Earth had only their own eyes through which to see themselves. That all changes when the technological eyes of an alien probe comes to our planet in study of the local inhabitants around the world. What future lays ahead of Homo sapiens depends on streams of sensor data and number crunching of the undetectable and seemingly innocent Red Rover.

• Four Days in Backwater
The Great Coyote chase to build the first faster than light vessel over, America's U.S.S. Roadrunner is the third place design out of four nations. Yet it is first in FTL speed. It is also the first FTLV to discover traces of civilizations in other solar systems. The crew of U.S.S. Roadrunner are in awe of the aliens they meet, and take precautions the best human minds advise. However, the aliens see under privileged wayward yokels needing to be humored and humbled. Here Homo sapiens discovers all their theories of first contact fall flat on bad premises and do nothing but give the employees of Planet Copan's truck stop a good laugh.

• Small Time
With new technology comes many uses. Some constructive or even lifesaving. Others for great harm and to satiate personal ambitions. Many often end up what hobbyists tinker with in the garage. Others still become the expression of mischief. In Todd's day hacking long since departed the digital world and entered into the very physical realm of biology. DNA became the new code to write and manipulate. Small Time racing of "mini-mounts" drew talent from all corners to be applied to a myriad of species. All bred to small stature, yet still strong enough to carry a rider heavier than they. Todd also dabbled in "Jacking" with a G of genetic code to wage a harmless war of ridicule against the corporate world. He fit the bill of real bioterrorists all too easy, even if it was clear to the authorities he didn't do it.

*** Theme II: In Dreams, Thus Speaks the Universe
When the universe so commands, the story writes the author. Such tales come to us as we sleep, waking us with the urge to reveal what was shown us when our closed eyes rapidly darted from side-to-side.

• Encyclopedia Capella
We think of autism as a rare affliction brought onto few among us. In Mr. Ency's world nearly everyone, including Ency himself, exhibit the condition. A distant colony finds itself inextricably sinking into the proverbial sands of their desolate desert planet. Being an habitual encyclopedist cursed with such keen attention to absolutely everything around him Mr. Ency can't help but record all of it. But it's what lives in the wild dunes between cities that will test him and everyone else aboard one of the great hover ships cruising over burning sands.

• The Rez
Most American Indians have had live in two worlds. Whether they grew up on The Rez or, like Randy Crowfeather, constituted "City Indians." Believing that service as a Navy Seal prepared Randy for anything, he would discover how wrong he was. When the bodies of mutilated white people show up during one of Randy's frequent visits with grandfather there came with it a tragic family past to be confronted. It is said that all Indians must, at some point in their lives, make a choice.

• Dimensional Cloister
All parents hold their children up as being special and destine for great achievements. In Aziz's time the scale of greatness would span across the entire multiverse. Brought to a school for gifted children, Aziz learns he isn't the only little boy who can send his mind slide back and forth along the temporal threads of his life. Now he's to learn how to save humanity from extra-dimensional parasites that unravel the very existence of their hosts throughout all time.

• Hellbound
Suppose you lived your life all wrong. Imagine that because of bad decisions or even inadvertent choices prior to death your soul had been condemned to hell. Then what...? A tale of learning coping skills no living spirit would need in order to accept and accommodate an afterlife of deafening horror and blinding pain lasting eternity.

*** Theme III: Conjure Me A Tale
The act of storytelling is a form of sorcery. The teller casts a spell upon their audience in summoning up tales that never happened, yet impact the reader as if they had lived the adventure.

• Enkindle
Just because you've studied sorcery for more than fifty years doesn't make you a sorcerer, Eric's master, Iccabazzi had said. Were it so easy sorcerers would be everywhere. The power of magic remained an external tool to him. To BE that power and have it within him as the air he breathed Eric needed to face the challenge of the dragon. Only it could make sorcerers of mere mortals. It more often made smoldering ash of those who failed.

• Counting Coup
We've all heard the story of Custer's Last Stand, and in recent years we learned the more accurate sequence of events as told by Crow scouts working alongside the U.S. Cavalry. Suppose there's yet more to tell. Most armies pray for divine intervention in battle. With the arrival of a Manitou, a spirit of the Earth, one side will receive that aid in their darkest hour.

• Arrows of Winter
Sure, being a diplomat in a feudal age can be tough in any civilization. On an alien arctic world harboring two indigenous species, one avian the other a rather out-of-place serpentine people, the rules of victory and defeat don't change. The prince whom Ayawa served had to pay tribute to another kingdom who staked victory over his air forces in battle. Part of that tribute would take more than questing for the famed Redsmiths and healers of the serpentine Fshajar. It required that Ayawa learn nobility isn't only bestowed at hatching, but is also earned though noble acts.

• To Drop A Bead
Carl Bohonowicz struggled with more than simply getting people to say his name right. As the police department negotiator he didn't quite seem suited to the job, and possibly the reassignment was a punishment as well as a leash. Then came the Randal Ivison hostage case. We all wear masks. How much they hide and what they let through are the only true differences.

*** Theme IV: Too True to be Real, Yet Was Lived
• Bride of the Blackbird
On the first day of summer, 2010 a small neurotic songbird wages mono a mono war against an equally dark clad talking ape to defend The Misses and their beloved nest of hatchlings. An absolutely true tale of nature's comedy in the style of the great humorist himself, James Thurber.