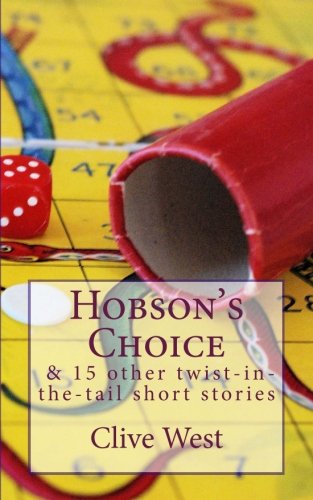 about this book: Hobson's Choice is an anthology of short stories which span a variety of genre. However each tale contains a common element, namely an ending which, try as you might, you will not guess. A delightful variety of baddies populate the pages; they well deserve a suitably unpleasant comeuppance, but this may or may not be forthcoming. There are also plenty of innocents - some of whom initially appear to be otherwise.

Here is a brief run down of my tales, trying hard to avoid spoilers, of course!

A Good Education is set in an English public school in the 1960's and has a supernatural element. The dark corridors and oppressive atmosphere of the buildings and the ubiquitous bullying by both pupils and teachers are very reminiscent of my own schooldays.

Hobson's Choice is the title story and examines whether we really do have freewill. I believe that this is the best piece that I've ever written and I would defy any reader not to find it disquieting and thought-provoking.

Dear John is a warning to anyone placing trust in another to partner them in a crime. You think you all want the same thing - but do you really?

Lucky Charm and Return of the Centaurus might be classed as science fiction yet they are much more of a study in human nature and how, despite all the technology we will undoubtedly one day possess, underneath we will still be the same Human Race with all the foibles we have today.

An Enduring Smile is a very gentle tale which looks at the perception of time through the eyes of an elderly lady. To say more would spoil the story.

The Racing Line is set at an Italian motor-racing circuit and is a classic-style ghost story which will keep you guessing right up to the end.

Seeing Is Believing tells the story of a phony psychic who suddenly finds herself in mortal danger. Will her ancestor's genuine powers surface in her hour of need?

Everyone A Winner follows a family who win the lottery but then decide to stay in their old neighbourhood. What happens when their next-door-neighbour gets a bout of vicious jealousy?

A Day At The Beach is the story of a nice family outing to the coast but, if you've read thus far, you will know that the story is going to be anything but pleasant or obvious in its outcome.

Moving Up is for those who like their villains hard-core style. It is the story of a small-time property developer who will stop at absolutely nothing to get his way. In doing so, he loses sight of the fact that there is always someone bigger and uglier in this world.

The Watcher is there to seriously challenge your prejudices. A man sits observing young girls in their playground but is it all that it seems?

Lost is about a lad who goes missing while on a trip to a burger restaurant and the subsequent search for him.

The Bench tells the story of a day in the life of a park bench, interweaving the lives of the various people which sit on it.

No Walk In The Park is another 'it isn't what it seems' tale of a child-minder whose day rapidly gets out of her control.

Last Orders is a cautionary tale of a young lad who puts his trust in others to 'do the right thing' but whose naiveté may well be his undoing.

I've always been fascinated by probability paths and how miniscule factors and seemingly trivial and irrelevant decisions can have massive and totally unforeseeable repercussions. Lynch mob mentality has always troubled me and many of my twist-in-the-tail yarns serve as a timely warning to those who would leap to conclusions.

My target readership is anyone who enjoys a read that will set them thinking but not tie them up in horrendously complex plots and sub-plots. While much of my subject matter is dark, it is always realistic and I have tried to handle it in as light a way as I can.

The stories were penned while I was staying in a lymphedema clinic in the Black Forest of Germany. I tried to write one every day and then read it out to my wife over the phone when we spoke that night. When I got home I polished and edited the tales and then assembled them into the collection you see today.

For the Kindle version of the book, I chose a direction sign for the cover to indicate the 'which way will you go? ' nature of the stories. The book is also out in paperback and this has a cover showing an old snakes and ladders board - one with rather more snakes than ladders. I felt this reflected the darker side of my tales - the idea of trundling along through life and then suddenly finding yourself on a very steep and slippery slope.

Funnily enough I think the hardest part of writing the book was figuring out what order to put the stories in. There's a certain logic to it which I hope those who read the book will find natural.

It's probably an awful cliché but I really enjoyed writing these tales and I hope that mischievous pleasure in them shines like a beacon through some of the bleaker moments. If I've entertained, made you think about your own perceptions and encouraged you to read more of my work, then my goal has definitely been achieved.

My favourite review quote said: "The main strength of these stories is that they are so believable and realistically written that each one serves as a reminder of just how quickly life can turn on us, for better or worse."

I think that completely sums up the message I was trying to get across.