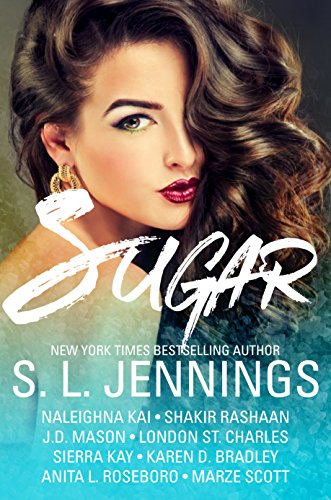 about this anthology: I've always wanted to do another anthology after the success of Signed, Sealed, Delivered ... I'm Yours. But it was listening to the webinar by Alessandre Torre that inspired me to start the NK Tribe Called Success and take on the process for doing Sugar and another anthology titled, Spice. I already had a marketing group, but having a group focused on writing and growing together that way, was an awesome experience.

There were many more dynamic authors who were all in my promotions group, and New York Times Bestselling author, S. L. Jennings threw her hat in the ring. I know half the battle is writing, the other battle is the marketing and promotion. We started with thirty authors, but several dropped out because of their busy schedules and our slated promotion schedule. Each author brings something wonderful to the table. Originally, it was supposed to be three anthologies. Sugar, Spice. & Everything Nice. I'm kind of glad, now, that it went down to two because the editorial on this was a BEAST in a four-month period that we pulled this off, but it was soooooo worth it.

For my story in the anthology, Sugar Ain't So Sweet, I wanted to write a What If? What if a wife got so fed up after finding out she'd been living a lie--that she left everything and walked out to find herself. The cover is designed by none other the graphic designer to the literary stars, Woodson Creative Studio.