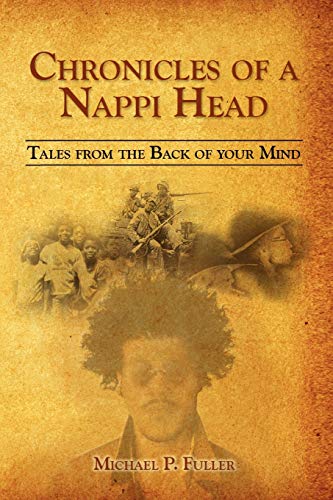 Book: Chronicles of A Nappi Head - Tales from the Back of Your Mind by Michael P Fuller

about this book: I am a writer and Account Executive living in Atlanta, GA. Chronicles of a Nappi Head is a collection of tales that will excite the spirit, it may reveal times and places that you have never experienced, or it may simply bring back memories of past occurrences that have been in the back of your mind. Chronicles will take you to a small town in South Carolina during the early 1920's, where a family man had earned wealth while others in the town thought that, by right, he should stay needy. Chronicles will move you to battles in Western France during World War II, with a Negro Army squad in search of treasures; you will ride alongside a salesman in Chicago for a day; you will follow the adventures of a boy's journey into manhood, when he tries to hang out in a "grown man's" pool room during the 70s; you will travel in a mystical train ride in the 60s, and to a hurricane's fury destroying everything in its path, including a lover's relationship. Learn from the Chronicles, laugh from the Chronicles and enjoy. All ages will take pleasure in reading and discussing Chronicles of a Nappi Head.

Sometime in the early 1990's, I started writing on a "typewriter", that's what I said, a "typewriter: I don't know why I began writing, nobody asked me to write and I never considered writing as something I'd just do, but there I was clumsily, slowly but creatively pecking away. Writing down memories of past occurrences that have been in thoughts, ideas, streets, characters, chatter, dialogue and actions that actually made me laugh and or react.

After some months had passed, I had finished my first complete story, which I never read again. But instead I threw it in a drawer unedited and unread by anyone. I began to write another story, which I eventually finished and again tossed it into another drawer, unedited and unread. Almost right away I wrote a play and again tossed it into another drawer. Talking about your closet writer! I continued to write short stories about events and relationships unplanned or outlined, letting the characters, times and places drive my way through the story writing process while piling story on top of story in my desk drawer.

So what was it? Why did I continue to write? Hell, because I got off on it. I wasn't trying to make a name for myself as an "author" or try to become rich, but it was just for the time I spend alone in my writer's closet with not a soul around to tell me what to do or where to go, how things should be done, or the heartache of the world we live in. I have determine that even if nobody reads a word, writing is just something I like to do.