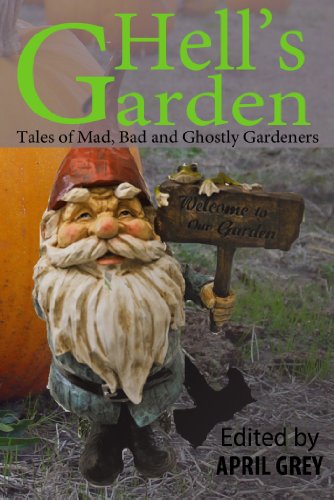 about this anthology: Sample Story: GUNDA'S GNOMES
By Rayne Hall

Daffodils nodded their golden heads, tulips stood in waxy splendour, and early hyacinths spread their heady scent across the allotment garden. Savouring the rare sunshine and silence, Gunda polished her gnomes with a soft cloth until each red cap shone.

She knew the name of every one, from the conventional store-bought ones who carried watering cans and leaned on spades, to the special editions which could be found only in her garden. She wiped a pigeon dropping off Arabella's sleek shoulder, straightened the drooping Anthony, and placed Angling Ajax next to the waterbutt.

The robin in the hawthorn screeched a warning, and her new allotment neighbour marched down the garden path, shoulders wide, elbows to the side, designer wellies crunching twigs underfoot. "Playing with your toys again, Gunda?" His chuckle dripped with oily contempt. "A lady of your advanced years?"

He clanked his portable stereo on the bench and flipped it into grating life. A male voice panted over throbbing metallic rhythms, shattering the peace.

He smoothed his creased trousers and barked orders into his mobile phone. "No later than Thursday! That's your job! Get it done!" Then he peered at Gunda through purple-tinted glasses.

Crouching by the daffodil border, she tried to ignore him, but her stomach fermented with anger and her heart started to pound.

With trembling fingers, Gunda kept polishing a special edition gnome who carried a briefcase and wore an old school tie.

"Are you deaf, or what? I asked you a question!" His wellingtons trod across her freshly dug vegetable bed, crushing the soil into clods, and stopped barely a finger-breath from her knees. "Answer me. Are you ashamed?"

"I like my gnomes," Gunda defended without lifting her gaze. Her voice sounded feeble even to her own ears. "And most allotment plot holders admire them."

He sneered and kicked at a gnome, toppling it over. Gunda yelped.

He laughed, and kicked another one. And another, and another. They skittered across the beds. One landed on a paving slab with a harsh chink.

Gunda ran to inspect the damage. "Her nose is chipped!"

She pressed the wounded gnome to her chest.

He marched close up to her. "Are you?"

"I'll complain to the allotment committee about this." She meant to say this with calm and dignity, but it came out as a desperate squeak. She had already appealed to the new committee to restrain this new plotholder's behaviour, but they had shrugged off her pleas. They did not like trouble; they had no cause to believe her; without witnesses, it was her word against his.

His laughter sounded like a big dog's bark. "Get a life, woman! It's only a gnome."
He strode back to his own plot, where he turned the stereo volume up higher and popped a can of lager.

Gunda ran a tender finger across the little figure in her hands. The vandalised victim was not one of the special edition gnomes, but precious nevertheless, and the injured face would not heal. She straightened and spoke with slow determination. "I expect you to pay for the damage."

"Expect all you want, woman. But you can't prove a thing." He ripped couch-grass from his cabbage bed and flicked it into Gunda's garden. "Prove that, too."

Only the flaming fury in her guts kept the tears from streaming down her face. She knew his type, of course. A coward and weakling, he made himself feel big by bullying others. She was his chosen victim simply because there was something different about her. Where others grew peas and potatoes, she cultivated gnomes.

It was the story of her life. Unpleasant people always homed in on her like slugs on a cabbage leaf. Even as a child she'd been bullied because her mum made her wear hand-knit sweaters instead of shop-bought ones. In her teens, her studiousness had singled her out, and in her twenties, it was her ambition at work.

Shutting out the provocations, she focused on polishing her gnomes. But when he tossed the empty beer can into her little pond, anger spiralled from the bottom of her belly up into her throat. She wanted to yell at the bully, but of course that never solved anything.

She remembered what her college counsellor had suggested for whenever she felt angry or helpless: imagine the tormentors as oinking piglets or knee-high gnomes.

The piglets idea had been fun, but gnomes had worked better for Gunda. Over the years she had refined the method on the jerks who made her life miserable. The snotty bank manager who refused her a loan, the landlady snooping in her drawers, the neighbour whose rap recordings pounded until long after midnight, the boss who always pinched her bottom - whenever she transformed them mentally into garden gnomes, she felt better.
Indeed, this was what had inspired her interest in collecting gnomes.

The allotment bully was coming again, with his designer-booted swagger heavy with importance, beer can in one hand, a bunch of chopped brambles in the other. He planted himself on the boundary path between their plots, pushing his toes into her seed bed. Slowly, he crunched the can in his fist. It popped and whooshed with hollow sounds of metallic pain. He flicked it at Gunda's feet. Then he scattered thorny bramble pieces over Gunda's freshly-raked seedbed.

If she hurried to pick up his droppings, he would savour her submission. If she left them even for a short time, the brambles pieces would dig themselves into the soil, and if she missed even one, her garden would be infested with thorny bramble weeds for years.
With clenched teeth, she fought for self-control, and lost.The heat in her stomach had reached boiling point. It was time to apply the anger management technique.

She tightened the roaring anger that spiralled through her body into tight coils. Blood throbbed through her limbs, and her skin tingled all over. In her mind, she painted a picture of him at a tenth of his size, with a pointy red hat that went well with the designer wellies. Then she focused and released her balled fury.

When the energy hit him, he gasped. "Saint Mercury!" Then there was a whining sound, like air whistling out of a pierced balloon.

Gunda watched with glee. The morphing moments were always so satisfying.

Right before her eyes, the bully shrank. He opened his mouth to scream, but no sound came. His expression was frozen in wide-eyed horror.

Exhausted from the effort, but satisfied with the result, Gunda waited until the calf-high figure solidified and was cool to the touch.

Then she placed it by the compost heap, between the bank manager and the bottom-pinching boss.