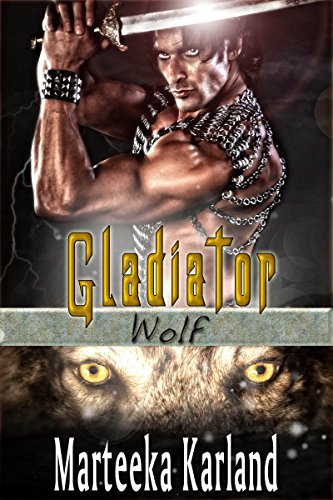 about this book: GLADIATOR WOLF is about a wolf shifter caught in a futuristic earth where shifters are captured and used as slaves. This particular wolf has been thrown into the gladiator arenas and has become the most feared and lethal of all gladiators in the region. His captors have tried to bend him to their will, but he refuses to fight his own kind. In his world, he's known as the Guardian, the protector of his people and best friend and right hand of the king. As a result, he generally fights humans who try to beat him for money. In the midst of the violence, however, he meets one gentle soul. Unfortunately, she is the daughter of the man who owns him.

The research for the volcano scenes was extensive. I took accounts of the Krakatoa eruption in 1883 as examples of what might happen to Brandwulfr and Miranda as they escaped the city for Brand's home. I found the prep work almost as fun and rewarding as writing the book itself. (does that make me a geek??) Whatever the case, I think it lent a touch of realism to this fantastical story.

Here is what people are saying about GLADIATOR WOLF on Amazon:

• "Great job by the author with the storyline, action, characters, and romance." — luv2rd