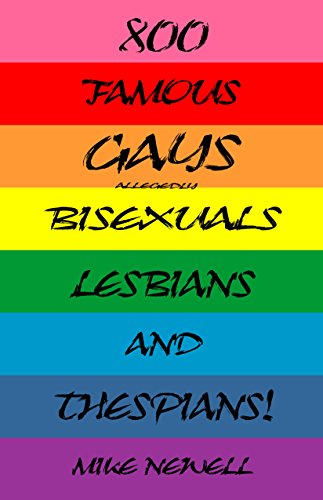 about this book: Having doubts about sexuality?

More and more people are!

success and happiness never-the-less,
and are free to express themselves freely.

Homosexuality it seems, has been around about as long as men and women have been around.Freud and others who have studied this phenomenon,have come to the conclusion that sexual attraction between members of the same sex in not all that phenomenal, not really remarkable ... it's a not uncommon variation in sexuality.

Back in 1957 in England, after a great deal of serious discussion, it was recommended to Parliament that homosexual behavior between consenting adults

should not any more be considered a crime; that homosexuality was not a mental or physical disease and that the laws against it fostered suicides, blackmail and homophobia...and that it should now be decriminalized. After debating it for the next ten years, this was at last done in 1967.

Being gay was no longer considered some sort of sickness...and then, one by one, American states began legalizing same-sex marriage, and by the time 37 states had made it legal for same-sex partners to marry...at last, in June 2015, the US Supreme Court ruled that same-sex marriage was a basic human right,
much to the horror of the Republican religious right. So America joined the other 16 countries that had already achieved this: Argentina, Belgium, Canada, Denmark, France, Ireland (yes, Ireland!The first country in the world, to approve this by popular vote!) Iceland, Mexico, The Netherlands, New Zealand, Norway, Portugal, South Africa, Sweden and the United Kingdom.

President Obama has proved to be the very first gay-friendly US President, the very first to even mention Gays in his second inaugural address, and he asked gay poet Richard Blanco, to read his specially written poem...and again for the re-opening of the US Embassy in Havana, Cuba in 2015. President Obama has also actively participated in Dan Savage's "It Gets Better' campaign.