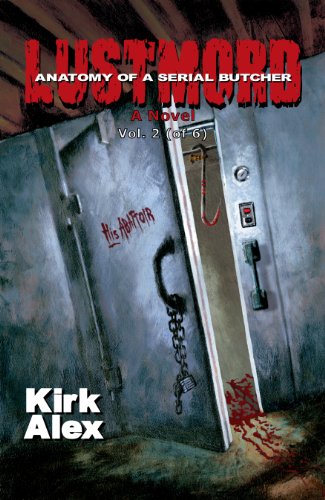 Book: Lustmord - Anatomy of a Serial Butcher Vol. 2 (of 6) by Kirk Alex

A WORD OF CAUTION

"And if you gaze for long into an abyss, the abyss gazes also into you."
–Friedrich Nietzsche

Translation: this one is not for the faint of heart, nor the weak of belly. Foretold is forewarned.

I started LUSTMORD: Anatomy of a Serial Butcher back in 1987, and it is January 17, 2013, as I write this. How many years is that? Twenty-six? Give or take. I say give or take because somewhere in there, during the mid 1990s, I had to lay off the thing for about five years. Why? Nightmares. Cold sweats. Unable to sleep. Why? Subject matter. Some of it was too damn horrific and the images wouldn't go away at the end of the day. Five years. Not to mention another three years when I could only face the book for about four or five months at a time. The shit was sick and depraved. Fucking brutal. I needed a break.

Why go anywhere near the subject matter, then? Why fool with it? Because I have to bounce around, move from genre to genre, or go batty–and because if I'm going to do a book about a sociopath, you better believe one goddamn thing: I am going to treat the material with absolute honesty. There is no other way. I did not want to whitewash (or sugarcoat) any of it, the way certain writers like to do, or the way some, rather, most Hollywood flicks treat the material: by having the unpleasant stuff happen off screen, or else it's done with gimmicks and cheesy effects. I wanted it raw, and I wanted it to be disturbing–because when it happens, the way it happens in real life, that's what it is: appalling, venal, sickening and twisted. So I repeat, read at your own risk.

The author/publisher is not responsible for any nervous breakdowns, facial tics, insomnia, depression, loss of appetite, loss of hair, sexual dysfunction, bouts of insanity, marriages and/or relationships disintegrating, time spent in therapy, stays in the bughouse, shakes, quakes, headaches, heart problems, vomiting, nausea, episodes of anxiety, suicidal tendencies or a sudden, inexplicable urge to do bodily harm to your fellow humans, and any other ailments, be they large or small, that you may experience as a result of having read LUSTMORD: Anatomy of a Serial Butcher. You have been thoroughly advised. Proceed at your own peril.