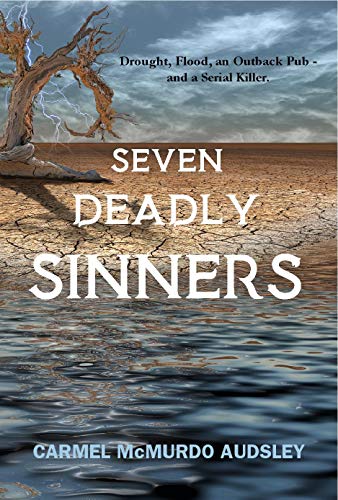 about this book: For anyone who has never visited Australia, or experienced the country in drought, it can be hard to imagine just how dry the continent can get. It can also be difficult to appreciate just how isolated some parts of rural Australia are, and how badly people, animals and plants can be affected when it doesn't rain for years. Some people don't see another soul for months at a time.

This novella is set in 1957 in a fictional outback pub near the Queensland/New South Wales border, and is based on the many pubs that dot the landscape and offer a respite for weary travellers across the wide brown land. Eleven people are thrown together, isolated by swollen rivers and creeks. As the booze flows and the flies buzz, details of their lives unfurl and danger lurks in the form of unpalatable cocktails, dubious food served up by the proprietor – and a serial killer. But who could it be? See if you can guess.

I fell in love with the quirky characters from 1957 Australia. I could picture myself in the rustic bar getting to know the travellers who were trapped as the flood waters rose. A tense plot with great descriptions. [by Vicki Thompson]

The author gives readers a bunch of rag tag characters, and vividly describes their surroundings and the action. It is suspenseful and kept me guessing. I had my favorite characters and really felt I was right in among the action. A riveting read! [by Meg Addams]

The characters were well rounded, the scenery well described and the suspense well maintained. A great murder mystery and a very worthy addition to the whodunnit genre. [by Martin Dyer]

Surprising, delightful and fun to read, this whodunit is so well written. From the Texan with the big cigar and his flirty wife, to the overweight coach driver and bizarre young lad with a penchant for collecting butterflies and peering behind doors, it kept my interest to the very end. Now that I know who the killer is, I'm going to read it again and look for clues. [by Abbie Barnard]

A gem for a TV feature

Straight out of the Agatha Christie genre, this story starts with an accurate scene-set in the outback of Queensland with all the extremes of locality and climate woven in. The setting of a pub miles from the back of beyond is a perfect location as we realise, when the weather closes in, that there is no escape for any of the possible victims. Again, in the best Christie tradition, clues are skilfully placed and the suspense racked up relentlessly. The end is as dramatic as it is surprising. I should add that I fell for a red herring and my guess at the perpetrator was, accordingly, right off the mark.

Kept me guessing to the end

I learned so much about the outback with this book! I want to go there! The characters the author has created seemed so real to me and I had my favorites who I hoped wouldn't get killed. Great story - kept me guessing to the end! [by Andrew Grant]

This book took me into its pages

The Aussie outback sure sounds frightening. Nothing and no one for miles and an endless view of parched earth. They prayed for rain for years, but when it did come it came in a deluge.Eleven people, or twelve people if you count me the reader, are trapped in a run down hotel. I could see each character clearly and listened intently to their stories, as though I was sitting at the bar with them. As the dead bodies started to pile up, I started to suspect everyone, and wonder who could be the killer. This book totally took me into its pages. A great read. [by Dave Fairbairn]

A good mystery and a fun read

Throw together some quirky characters in the Australian outback, add a flood and a serial killer and you've got a fun and interesting read. This book had me hooked from the start. The characters were so well defined that I could easily imagine them. I could see the old pub, and the dumpy landlady, her creepy son and slovenly husband. A great weekend or holiday read. [by Frances Kent]

As someone who has never been to Australia, I found this book fascinating. Set in 1957, it features a group of people stranded in a hotel in the outback. I knew Australia was a big country, but to not have a neighbor for hundreds of miles is real isolation. The author describes the drought conditions and the characters so well that I felt I knew them. I felt the heat, saw the flies buzzing and could picture each scene. It's a quick read murder mystery, with some humor thrown in. I thought I knew who the killer was, but I kept going back and forth. A fun read. [by Helen Carter]