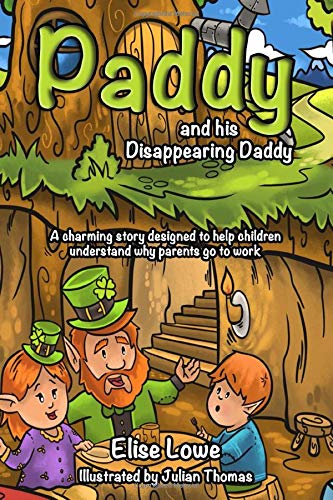 Book: Paddy and his Disappearing Daddy - A charming story designed to help children understand why parents go to work by Elise Lowe

about this book: Elise Lowe wrote this story for her own little boy. From a very young age, he'd become extremely upset whenever his father left the house to go to work. Elise realised that "Daddy's going to work" made little sense to him, so she tried to find a way to demystify the concept of earning a living. From here, she created the story of Paddy and his "disappearing daddy". After completing the story, Elise and her son made cardboard versions of Paddy and his parents, which they'd use to act out the tale. Very quickly, her toddler began telling her that his daddy was going to work just like Paddy's daddy. As a result, it became much easier for her husband to say goodbye in the mornings.

Keen to share the story with other families in a similar predicament, Elise commissioned Julian Thomas to illustrate the book. She loved seeing the story come to life through his drawings.

Although the story is about a father going to work (reflecting her son's personal circumstances), Elise hopes that it is relatable enough to be enjoyed by any child with working parents or guardians.