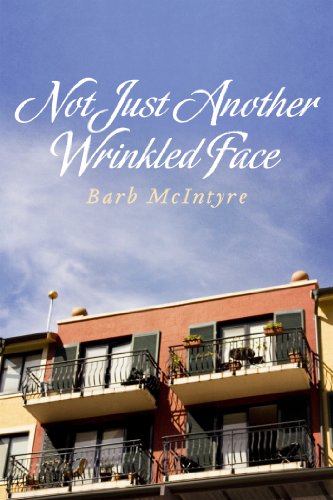 Book: Not Just Another Wrinkled Face by Barb McIntyre

about this book: This book takes place in a condominium apartment building where all of the residents are senior citizens. Most of the scenes take place in the building, but one of the women, Mary, also spends time with her family. The first scene with Mary at her daughter's home was initially a one act play that was entered in a competition in 2005 with the title You're Not Listening. Over the next few years I wrote scenes about Mary and the other seniors in her building, and the one act play became a full length play. Then I decided to turn the play into a book which gave me much more flexibility. It was great fun to think up Mary's mangled clichés and original versions of popular songs.

• "Not Just Another Wrinkled Face lives up to its name. It sets up a dynamic and varied cast of characters, all with their own personalities and baggage from a lifetime of successes and failures. The dialogue between McIntyre's characters stood out in particular – they were animated, organic and absolutely hilarious."
— From the official OnlineBookClub.org review by Dphaber

Other books by Barb McIntyre (more)