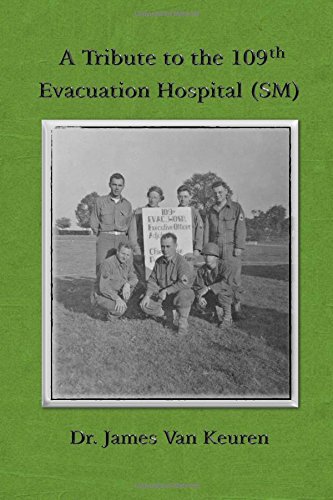 Book: A Tribute to the 109th Evacuation Hospital (SM) by Dr. James Van Keuren and Mark A. Walters

about this book: As we were closing up my mother-in-law's home we discovered documents about my father-in-law's service time in the European Theater during World War II with the 109th Evacuation Hospital (SM) which he never spoke about. I found that the unit treated close to 30,000 soldiers and was the first hospital to cross the Rhine into Germany. Veteran stories about meeting General's Patton and Eisenhower were most interesting along with a veteran witnessing German collaborators being clubbed to death in a small Czech town. Plus nurses telling heart-felt stories of treating 18 and 19 year old wounded soldiers who knew they were going to die, but were thankful for the reassuring words from the caring members of the 109th Evacuation Hospital (SM).

The veterans stayed in touch after the war with annual reunions up through the 1980's which was an indication that they were a tight team that remained friends after the war. This team was an example of what Tom Brokaw called the "The Greatest Generation" who preserved our democratic ideals and values that we cherish today.