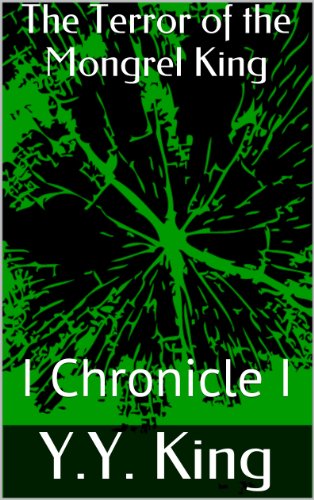 Book: The Terror of the Mongrel King - I Chronicle I by YY King

about this book: This novella is the beginning of of the the 1st Chronicle of the Terror of the Mongrel King. In truth, I am fascinated by (anti)-Messianic tales and have been heavily influenced by Bowie's Ziggy Stardust and Pink Floyd's/Roger Water's Pink. The idea of a character who is clearly on a trajectory for stupendous things but falls off along the way into the abyss of life is mesmerizing to me, but also personally applicable in a way.

The 1st Chronicle will focus heavily on father-son relationships and I enjoy leveraging motif, foreshadow, and colors. Below is a taste of what you can expect:

As if on cue, half the crew took a balancing step backwards as the edge of the maelstrom tugged at the boat. Shuey looked over the edge. The waves of the pool swirled counterclockwise – the colors a mix of gray, black, silver and blue with green algae veins. Deep in the center was a red glow – its provenience unknown.

In spite of the short journey, the babe appeared worse for the wear. Shuey had stored the child beneath his tunic to protect it from the ocean spray, but in a few moments it would all be for naught.

"My mates. This will be short and sweet, just as the life of this babe, and just as the death of any plunderer worth his salt." He drew out the babe from his tunic. "This child without a name will join the ranks of the plunderers in the Asphodel Pools. Cursed from the womb, the Asphodels are his family now. He has no kin o' top of the salty seas, not me," he gulped and continued, "not Darcelina. He has no place among our kind. My only gift to this child will be the swift end fitting of any plunderer. He will never become a man and would have been the cod amongst the sharks during his rites. May we all walk the plank before ever lacking this compassion. He will join the Asphodel Pools as a Soul Soldier."

Shuey lifted the babe above his head. His eyes stung with tears saltier than the drops of the sea, but self-control saw him through the moment. The child turned its too-large emerald eyes, Darcelina's eyes, and looked right into the murky brown, drained eyes of Shuey. With a quick twist of his wrists, Shuey snapped the child's neck and tossed him into the maelstrom. The babe swirled around three times before being swallowed by the red shadow. Black fog rose from the blood-colored adumbration with an indulgent sizzle.