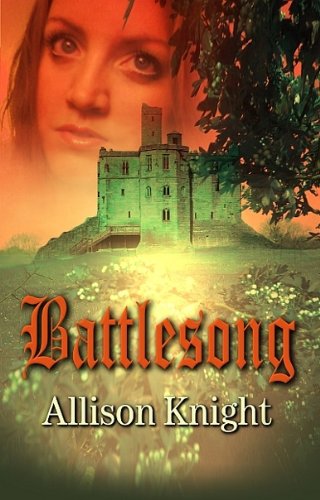 about this book: What would you do if your father married you off to a man who expected to marry your much older and prettier sister? That's what happens to Laren in Battlesong. This is the story of Arthur, the youngest brother of Rhianna from the book, Heartsong. Laren is the daughter of a Scottish laird.

After the ceremony which Arthur finds he must except, he dumps his too young wife at his new medieval castle and rides off to war. Then he refuses to return, because he's been tricked into marrying the wrong woman.

Laren accepts her life as lady of the manor and shows the kind of grit which one would expect of a modern woman. She makes changes, cleans the place up and awaits the return of her legal husband.

When he finally arrives, seven years later, the battles begin. She's not what he expected, and he doesn't like her changes. Unfortunately for Arthor, Laren is exactly what he and his small estate need and eventually he realizes she is perfect for him, but there are a lots of verbal battles, frustration, and a kidnapping before he discovers his true love.