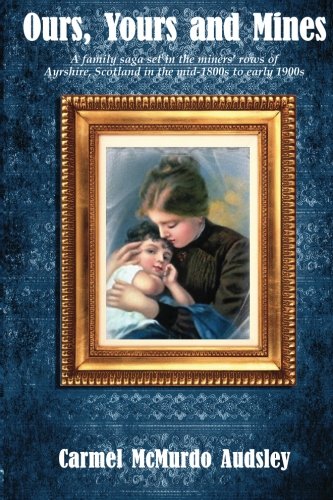 Book Reviews: Ours, Yours and Mines - A family saga set in the miners' rows of Ayrshire Scotland in the mid-1800s to early 1900s by Carmel McMurdo Audsley

about this book: IT'S WINTER, snowing and raining, and you are cold. You have only two sets of clothes to your name.

You live in a two-room house with a kitchen that measures 15 feet by 10 feet and a hole in the wall as it was called that leads to another room measuring 11 feet by 6 feet. The houses all butt up against each other and are built in rows, same upon same – some are spotlessly clean and others have rubbish and waste clogging up the open drains outside their doors. You have no bathroom, no toilet, no running water, no electricity, you cook over an open fire and there are limited washing facilities. You have a husband and sons whose clothes are covered in black coal dust after working in cramped conditions in a coal mine, sometimes in tunnels no higher than three feet, chipping away at coal with a pick for at least 10 hours in a shift. You have little money and 11 children to feed, clothe and nurture. You have to carry heavy buckets of water and coal into your house and you are exhausted at the end of every day. You can't afford to see a doctor and your children are born, and sometimes die in pain, in that little two-room house. There is no privacy for anyone, with children sleeping three to a bed and shivering throughout the night. In the Summer the sunlight is weak and the stench from the dry closets with open ashpits can be overbearing.

Welcome to the miners' rows of Ayrshire Scotland in the 1800s.

'Ours, Yours and Mines' is a well-researched historical novel about life in the mid-1800s to early 1900s for mining families who lived in the miners' rows. They suffered cramped living conditions, disease and death. There would have been good times as well as bad and the author has illustrated that, but mostly they eked out a day-to-day existence.

The story will make you realise just how lucky any of us is to be here.

Mines - we have all heard about the hardships and horrors they bring. This book shows the hardships the mines bring not inside the earth, but outside. It is very well written, and I often felt part of the family, although in the end, I was happy to be only a spectator. I also had to think that although that happened 150 years ago, unfortunately things have not improved so much: the horrors (mainly) Chinese and Chilean families went through in recent years spring to mind. [by Diane]

I have discovered a terrific set of books that cover life in Scotland from the 1600s to the present day. 'Faeries, Farms and Folk' goes into the lives of people on the land, with animals living in the house with them, and witchcraft very prevalent in their society. The book on this page 'Ours, Yours and Mines', I have just finished reading and takes the family into the coal mines. It is a very sad book as children die and the mother keeps struggling on to look after her family. They are well written and interesting stories and I am looking forward to reading the last book 'Far Across The Sea' to see what happens to them all. A very engaging style of writing. [by Rosie Gould]

Sequel carries on the story

After reading 'Faeries, Farms and Folk' set in 17th and 18th century Scotland and bought the sequel 'Ours, Yours and Mines' which moves the family from the green hillsides of farming land to the dirty mining villages. The writer's description of the working and living conditions was first class and the transition from the first novel to the second was seamless. What a story - and it's all true. I am now going to buy the final book in the series 'Far Across The Sea' and will report on that within the next few weeks. [by Mike Aspinall]

I loved following this family

I read the newly-released 'Faeries, Farms and Folk' and was so taken with the family story that I sought out the sequel 'Ours, Yours and Mines' which was the first book written in the trilogy (not sure why). The transition was seamless and I picked up the story as though it was the same book. My family lived around the Dumfries area in Scotland so it was interesting to read how life was back then. I like a story where you learn something about history. The characters were really interesting. Definitely recommend this book and its prequel. [by Janda Mason]

I have read this book, Ours Yours and Mines, after reading this author's new book Faeries, Farms and Folk. FF&F is the first book in the series, even though it was written last. The new book FF&F starts in the mid 1600s and takes the family through changes in farming and leads them to the coal mines. I wanted to find out more about what happened to the family so I bought OY&M and it was as though I was just continuing the first book - really really good. OY&M is quite sad as you follow the family through lots of hardships (children dying). Pretty sad. [by Carlie Krystian]

It kept my interest

The fact that this book is based on real people and real events makes it even more interesting. It is based on the author's own family history in 19th century Scotland in what are called miners' rows. The family in the story never seem to be able to get ahead because wages are low and sickness is all around. When I got to the part where the little girl died on her sixth birthday, I cried. I realised that this really happened to someone - it wasn't just made up. The whole book is a real journey and I thought it was a terrific story. I'm going to buy the sequel 'Far Across The Sea' which follows the family even further. [by Dale, Brisbane]

Easy to read and interesting

I read this book on a plane trip from the UK to USA. It's easy to read and captured my interest. I only put it down to eat and even then I was thinking about what was going to happen next. It's not full of flowery descriptions which I really hate, but stays on track with the story. The characters really draw you in to their lives, the children especially really affect you emotionally. Really, really good! [by Bronwen Masters, Kent, UK]

When you read how the mother in this story copes with heartbreaking circumstances, you can only thank your lucky stars that we live in times when health care is so much better. To lose your children, one after the other, at different stages of their lives, must be almost unbearable. Imagine living in a two-room house, with a baby and toddlers and nappies to wash in a bucket, with the rain and snow pouring down outside. Maybe it might be too raw for new Mums, but would be a great gift for older mothers. You can get it as a paperback or a kindle version. I thought it was worth the money and it kept me thinking long after I'd finished the book. [by Adrianne Nicholls]

It took me to 19th century Scotland

From the first page of this book I felt as though I had been transported into 19th Scotland. From the author's description, I walked down the coal-strewn path with Thomas McMurdo to the little miner's cottage that he shared with his wife and so many children. I shared the joy as a baby was born and the sadness when a child died. I went on the search for the old grandfather when he went missing and hoped that Mary's grandson would not go down the mines. This book would be great for anyone who had relatives during the period, but also for mothers who will no doubt shed a tear as I did. [by Margaret Malcolmson, Adelaide SA]

An interesting read from an emotive author

What a pleasure to be able to buy a novel that makes you feel! There are no dragons, or dungeons or heaving bosoms - just heartwarming stories about a working class family in Scotland in the 1800s and how they coped with life and loss. The author takes the reader inside the miners cottage and gives an intimate look at how many families got by during that period. It is based on fact which is even more interesting. As you read the saga, you feel the sadness as children die. The chapter where the old grandfather falls into the river, and the ensuing search, is very well written. If you are looking for an easy to read, interesting story then I would recommend this book to you. [by Claire Ferguson, Edinburgh]

You can feel the sadness

How does a woman carry on after losing child after child? The heroine of the story, Mary, kept caring for her children as they suffered tuberculosis and miners lung, and tried to get them away from the mines. I felt like I was in the little miners cottage, sitting by the warm fire and I wept when the little girl Margaret died. This book is worthy of a five-star review, but I've rated it as 'good' (which I guess is equivalent to 4 stars) because it made me cry! [by Alice Danvers, London, UK]

Very true to the period

This novel is well researched and written in an easy to read format. The people in 19th century Scotland who lived and worked in the miners rows had a hard life. Add disease and death and you wonder how they coped.