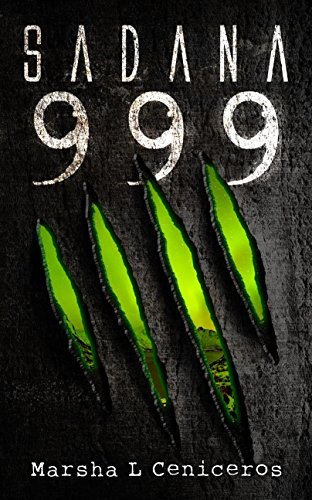 about this book: Science Fiction Redefined in New Sci-Fi Thriller

The single most suspenseful thriller, action paced mysterious literary masterpiece has launched its debut! Science Fiction book Sadana 999, an inferno of battles, a chilling opponent an ingenious landscape of poetic language used throughout the book. Furthermore the fabulous, compelling writing, thrills, tension and the struggle to survive will captivate the mind, body and soul. Surprisingly tender, genuine loving family moments create a breathtaking suspense. Fantastic entertainment, in conclusion Sadana 999 is a masterpiece and true work of art!

Marsha Ceniceros was born in Indianapolis, Indiana and raised up in Southern California. Her artistic, poetic showmanship has won several awards in the past. Self-published books, 'Taking the Mind for a Ride and Flames of torment,' two fascinating poetry book achievements. After a few years off from writing due to a severe illness, she is back, stronger than ever. Sadana 999 first began in 2008 and completed in 2015. We can expect to see her second science fiction novel in 2016.

Marsha Ceniceros began writing Sadana 999 in 2008, and did not complete the book until 2015. The main cause was due to the fact I had a tumor causing a large spate of illnesses. The tumor was discovered in 2010, whereupon the process to recover has been a bumpy road. When I watched a Steven Spielberg movie, I would say, 'He did it once more, that's what I wanted to write!' everyone's life is different, although we will have our time at some point in life. Now it's my time to release these books lingering inside my mind."