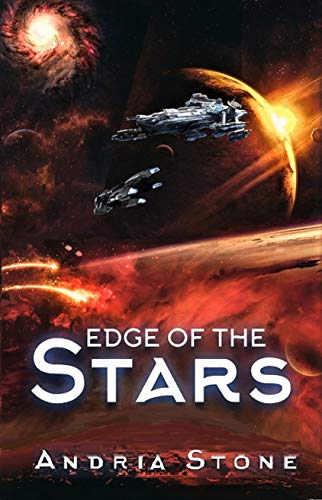 about this book: Edge Of The Stars: A Techno-Thriller Science Fiction Novel is Book 2 of The Edge Series by Andria Stone and a fast-paced, sci-fi thriller! Six x-military Terrans, two scientists, two soldiers, and two cybers experts visit Mars for a scientific symposium and are caught up in an insidious plan to overthrow the Martian government.

The action starts on the Space Station just minutes after they land and one of the scientists finds a body and is accused of murder. Later that night a Terran Colonel and two soldiers are found dead, which leads Mars to conduct a system-wide hunt for the culprits. As the x-military Terrans search for the guilty parties they wade through the criminal element of the three domed Martian cities while battling arms dealers, mercenaries, an infamous hacker, clone trafficking, and an insidious female enemy who will kill to avoid capture.

Edge of the Stars is an action-packed Science Fiction military thriller, with everything sci-fi fans love – starships, space colonies, cyborgs, secret military and medical technology and even a vicious female villain.

Video: EDGE OF THE STARS : A Sci-Fi Military Techno Thriller on AMAZON (The Edge Series - Book 2)