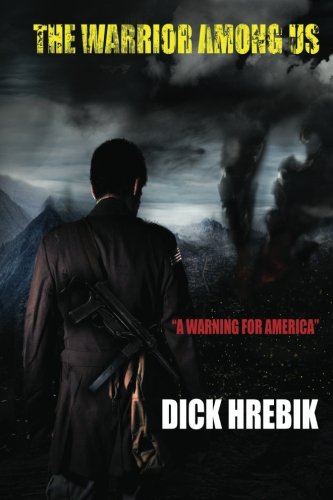 Book: The Warrior Among Us by Dick Hrebik

about this book: THE WARRIOR AMONG US is a science fiction story set in the years 1930 - 2025. After a nuclear war annihilates an entire civilization, the United States falls off the international stage when Congress becomes impotent after years of increased partisan politics, and is unable to function. The world becomes a battleground centered in the deserts of the Middle East. Finally, Deke, a U.S. Marine, takes up arms with another nation's army in an attempt to save the world from itself by the year 2025. Can he save Earth? Discover our destiny in this suspense filled thriller. Three of my predictions have already come true.

As a historian, I was inspired to write this book as a warning for America as I see history repeating itself, as foretold by the prophets. The title WARRIOR was provided by one of my publisher's sons who said the main character is straight out of some of the computer war games he plays. The cover was designed by a 16 year old boy. Writing this story was easy as it is what I truly fear will happen. Next year I will be writing the sequel starting in the year 2025. I hope readers will take note and realize our Congress is leading us nowhere, and that imposing our ideals on other countries is wrong. We are making more enemies around the world than friends. Semper Fi,