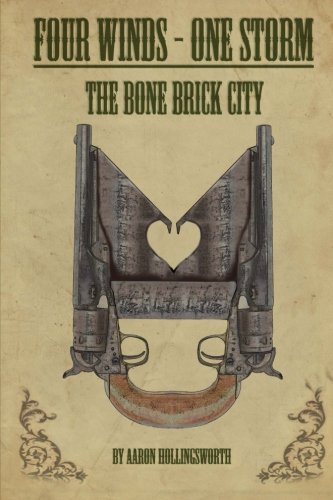 about this book: The streets of Embrenil are not so safe anymore as seemingly random citizens are being beaten, robbed, and blinded by some mystical curse. Will Foundling and Hindin Revetz are small-time heroes looking to test their skills and gain fame in the big city. They soon meet Polly Gone, a homeless runaway who witnesses one of the brutal attacks. After the three are arrested and thrown in jail for disturbing the peace they meet Sir Röger Yamus, a lecherous monster hunter. Banding together, the four make a deal with the local police to investigate the blinding assaults.

Part mystery, part action/adventure, Four Winds-One Storm: The Bone Brick City is the introduction to the supernatural world of The Draybair Cluster, a group of eight "huncells" large enough to contain oceans, atmosphere, continents, and new races and cultures. In this world, magic is called "theurgy" and it manifests differently in everyone, depending on what "philocreed path" they follow.

Blending elements of modern Sci-Fi superhero teams and medieval Fantasy adventuring groups, this book is a weird, fun, and thrilling ride full of colorful characters and an ever-twisting plot.