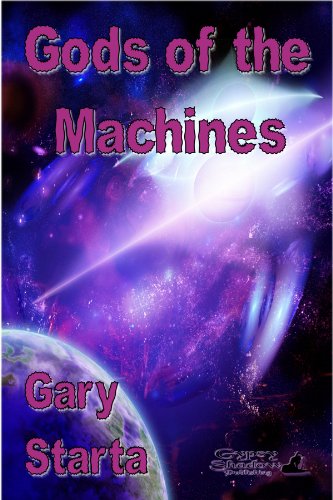 Book: Gods of the Machines by Gary Starta

about this book: SEX, MURDER AND THE SINGULARITY - A romance, a thriller, a SCI FI novel...

My interest in artificial life was instigated by Isaac Asimov. His robots, and their three laws, made me wonder what would happen to our society if they ever existed.

We are getting closer to this reality. Japan has made an android, similar in appearance to us, using synthetic skin.

We are nearing the singularity. And if we are, we will have to deal with those not born a conventional way.

Yet, they will still be borne by us. Who will be their Gods, if they have any?

GODS OF THE MACHINES explores AI with a look back at ourselves. Would we fear them, be jealous of them, or be racially biased against them?

"Starta's writing style is fluid and precise. He very effectively creates another world for the reader to climb into, and paints emotional scenes that are hard to let go off. After the first few pages, the pacing is perfect, the characters are compelling and the author steps out of the sometimes stiff genre of science fiction, and gives readers a heart pounding romance with a sense of "what the hell is going to happen next?"

"Ceres is the Earth's first colonized planet. A planet that will be home to humans and to androids. After a three year trip, Samuel, along with his fiance Sandra have stepped foot on their new home. New home, new jobs a new life. Samuel is will be a full fledged detective and Sandra will be chief medical examiner.

Samuel's new job started off by jumping right into a murder investigation. Samuel, who is not a fan of the robot non-humans, is sure one of them has committed the murder. Pinning it on one android, in particular was easy, but when the evidence starts stacking up, something is just isn't fitting together. When more murders start popping up, Samuel seems busier than ever, with the help of his new partner they will find who is doing the crime.

Sandra seems to like her new job as medical examiner. When Samuel turns against the androids, Sandra has a change of heart for Samuel. Maybe they are not meant to be together. Sandra believes the androids have a place with the humans, not just to be slaves but to be treated as a human is. Have the same rights, walk down the street or sit in a bar like they do. This is a new planet where things are different. Will Samuel find the killer and make amends with Sandra? Will one android bring everyone together ??

This was a great sci-fi book! Not a genre that I normally pick up BUT I was hooked right away with androids. The characters were easy to visualize and understand. I love the roboo bees and the halocat! Great read ! ! !"