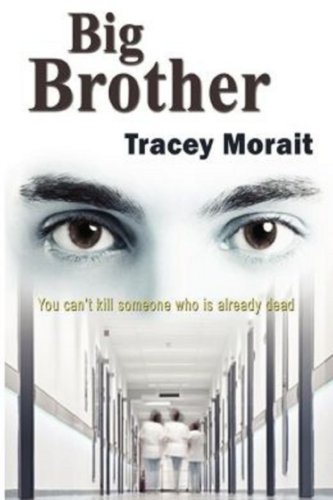 about this book: Ash is a teenage lad living in Liverpool, England, with some big problems: his mother is an alcoholic and drug abuser who neglects him, and his dad has left her for a job in the States to get away from her. Although his dad begs Ash to go out there with him, Ash feels he can't leave his mother; she's all he's got and he feels he has to stay and take care of her.

The other problem Ash has is that he's being bullied big time by the local gang, the Jessop Crew: Lee Jessop, his brother Lucas, and their mates. They pick on him because he's not from Liverpool and talks with a different accent. He's also a bit deaf from an ear infection he had years ago. He's small for his age and an easy target. The only thing that seems to keep him going is football, but in a city full of staunch Liverpool and Everton supporters he can't tell anyone he supports Manchester United.

Then one day the mysterious Big Brother, a tall, haunting figure with pale skin, dark hair and very dark eyes, appears out of nowhere to announce that he's come to help Ash sort out all of his problems. Ash doesn't know how he got into the flat. He didn't come through the front door and he definitely didn't climb nine floors up and climb through the window. He can also change his body shape with alarming consequences and clone his body to look like other people. Is he an alien, a ghost, or a figment of Ash's imagination? Ash doesn't know. Nor does he know why Big Brother is so keen to help him, until he finds out that the stranger has a history of his own with the Jessops, and is set on their total destruction.

I was inspired to write Big Brother because I like the idea of a vigilante character who ignores the rules to mete out justice, although I do give the message that it is not the right way to go about it, through Ash's discomfort with Big Brother's methods. I have aimed it at young adults because of the contemporary setting of gang culture and with that comes violence and strong language. It took me two years to write, partly because of family problems I had to deal with at the same time. The title comes from Ash's desire to have someone else in his life, like a big brother, to help him fight his battles. The book is mainly science fiction, although I have given it a horror element, but the book is not without some humour. People from Liverpool have a natural humour known the world over and I felt it would be wrong to leave it out.

I self-publish my work and my husband designs my book covers. He chose the face of the young man to give the creepy impression of the eyes following the reader around the room.