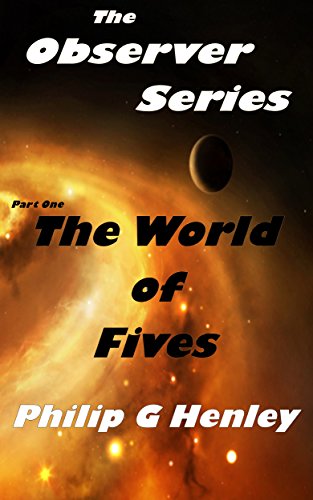 Book: The World of Fives - The Observers - Part One (The Observer Series Book 1) by Philip G Henley

about this book: The start of a new Science fiction series. The series is called the Observers. It is set 1500 years in the future. Human Beings have expanded into the stars. They have discovered lots of life but very few advanced civilisations and none at the same technological level as human beings. I wanted to write a more traditional space opera. Yes there will be space battles, aliens and new worlds but really it's the story of exploration and limited relationships.

Human Beings have expanded into the stars thanks to the benefits of 7D transportation. Life and planets are plentiful, intelligent life is not. A near Utopian existence for humans is supported by the dedication to various services. The Human Federation policy is one of non-intervention. Observe only, that is the mission of The Interplanetary Geographic Service.

Cathy is an Observer in The Interplanetary Geographic Service observing the planet Fivur as an exceptionally rare convergence of moons and orbits creates massive tidal shifts on the planet's surface. Five years into her initial six year mission with only Ix her Artificial Intelligence system for company she watches the planet.

Carlo a Fivurian must overcome the impact of the tides on the planet's power system whilst keeping his love Sello safe. Meanwhile Cathy tries to persuade her superiors to intervene and save the lives of the planets humanoid population. If she can save them they will need a new home but Earth factions have different ideas. Meanwhile another intelligent species on the planet the Sharok wait to feast on any human or Fivurian who ends up in the water.